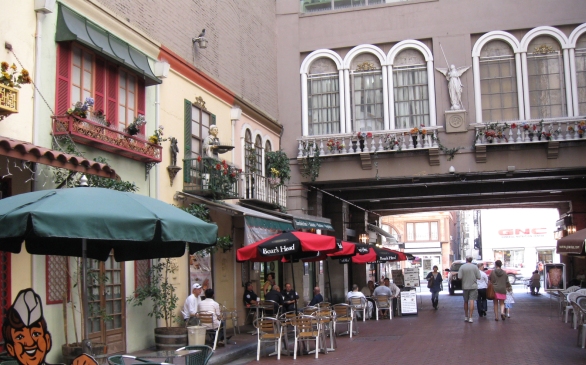 (Credit: laconservancy.org)
One evening as I was walking up 7th Street to meet friends for drinks, just as I crossed Broadway, I noticed a slightly hidden alley in the middle of the block that looked just like a tiny street in Europe. The street was cobblestone, there were Victorian-style tables and chairs on the sidewalk and cafés all around.

At first I thought I might have been reading too much into it; I mean, how often do you walk and step into a different era? I think you have to meet an evil and good witch or hide in a wardrobe for adventures like that. Obviously the developers of Downtown’s St. Vincent Court think otherwise, as they created a little slice of Europe where you would least expect it. This is Europe by way of Mediterranean inspired food, with a couple of Turkish delis and Middle Eastern fare. Starting off in the back and working your way towards the front is best at St. Vincent’s Court, especially if you’re hungry.

Sevan Garden (621 S. Broadway; gardenkebab.com) serves some of the best Mediterranean food I’ve had in a long time. The ground beef kebabs, Kofte (Katlet) and Lule, are so good; I bought an extra order to have at home. Spiced just under hot, the Lule’s heat can be toned down with a quick dip of yogurt with cucumbers, and you’re ready for more.

The basmati rice Sevan Garden serves is aromatic and fluffy and doesn’t overpower your entrée. The White Bean Salad tossed with tomatoes and herbs paired with warm pita bread is more than satisfying, as is the vegetarian sandwich with huge chunks of imported feta cheese. You can also order the kebabs as a sandwich; with or without a side of fries so you’re not too full to try the other options St. Vincent Court has to offer.

Super Grill (639 S. Broadway; super-grill.com) has kebabs like Sevan Garden, but the standouts are the sandwiches. It’s an eclectic mix, from feta avocado to pastrami, but they are great stuffed in a fresh pita. There’s a Spanish influence at Super Grill, like the chicken and beef fajitas entrees, but that doesn’t mean they don’t know what they’re doing with their range of options. In fact, the falafel could easily stand next to a spot on Fairfax Avenue.

Shawarma and gyros are the best at the namesake St. Vincent Deli (650 S. Hill St. (213) 629-3345). The Doner, a rotating spit of lean beef or lamb is juicy and plentiful. Make sure to ask for tzatziki, you really can’t have a proper shawarma without it. Nor can you bear to be without the tomatoes, cucumbers or salad!

You have to try at least one Panini at Arto’s Deli (659 S. Broadway (213) 488-1117), and I recommend the Empire Kosher Smoked Turkey pressed with Provolone with a side of avocado. Arto’s is the more “American” eatery, offering all things, from ham and cheese to hearty soups like the made fresh daily Lentil soup.

Garo’s Deli (639 S. Broadway (213) 622-1161) is small but has a full deli with an impressive grocery stock. You can purchase imported cheeses, olives, nuts and one of my hard to find favorites, rose petal jam. You pair that jam with a nice loaf of bread, a side of Greek yogurt and Italian tomatoes, and it’s an inexpensive fast snack. I recommend purchasing everything so you can have it at home. Garo’s Deli carries olive oils and vinegars that are used heavily in Europe, but not with the hefty Whole Foods/Bristol Farms price tag.

Finally, strong coffee and matcha tea are the draw at Le Café Bonjour (640 S. Hill (213) 670-0100) thanks to the skilled barista putting his efforts into making sure your cup of Joe looks beautiful. The Café Macchiato served in a sugar-rimmed champagne glass is almost too pretty to drink, almost. At the bottom of the glass lies a well of steamed fluffy milk, the coffee in the middle and whipped cream on top. It’s more of a dessert really, and it’s a fun alternative to the traditional coffee cup. They do serve coffee out of regular cups as well, though, so you’re all covered.
Article posted on 10/17/2011
This article has been viewed 2083 times.