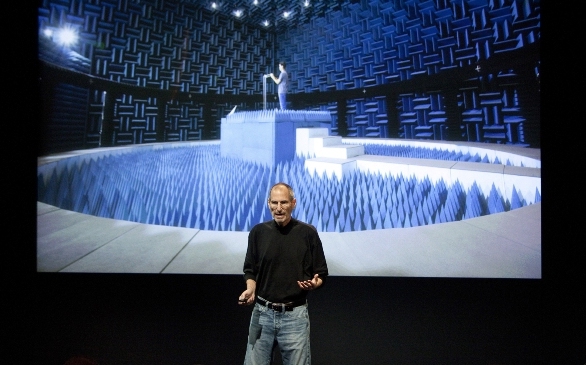 (Credit: Dai Sugano/San Jose Mercury News/MCT)
Steve Jobs might not have been personally known the millions of people who grieved his death, but that didn’t change the way that music lovers, technology fanatics and everyone in between were saddened by his sudden death. This was the man who introduced a completely new, different way of listening to music. It might not have been too good for the CD industry, but it was great for music lovers.

After the glory days of the Walkman, the portable CD player and their other technological cousins, no one was quite sure what to expect next. Then came mp3s and mp3 players. And then came the iPod. For some reason, this was the mp3 player everyone had to get their hands on. It was sleek and welcoming, seeming like something out of an episode of “The Jetsons.”

The first time I ever heard of the iPod, I remember it being described as the soundtrack to your life. The earbuds were nestled in your ears and you could walk through the world with your favorite songs in one compact device. Oh yeah, and it made you look cool, too.

As if that weren’t enough, iTunes suddenly made your shelf of clunky CDs look sad and pathetic. I was excited, uploading the CDs to my computer, labeling them all, having the album pictures pop up whenever I played a certain song. And eventually it was more fun to just find all music on one site. iTunes gave me the single of the week and a library of hundreds of CDs without the need to walk into an actual music store.

For a lot of people, this took away from the excitement of buying CDs, and for the CD business, it negatively affected sales. Now you’re in the minority if you own any physical form of music, from a CD to a vinyl.

But Jobs’ ideas make it possible for me to just buy a song from iTunes on my iTouch wherever I might find myself at any moment during the day. I don’t have to wait for a CD store to be open; I just need a WiFi connection. Suddenly music is at your very fingertips and your iPod is quite possibly your new best friend. You take it everywhere with you, you panic when you can’t find it; you sing, dance, jog along with it right at your side.

Jobs let us be even more personal with our music and opened up the music world by giving it an accessibility it once lacked. What Jobs also gave to the music world was the ability to take full advantage of technological advances and the Internet to spread music faster than ever before. With the rise of iTunes, artists understood that fans liked easy access to tracks, and the Internet could do much more than CDs and traditional advertisements ever could.

In that sense, Jobs’ contributions helped the music world grow and fully integrate itself into the world of the Internet. Now it’s not just a matter of who listens to the music, but how they listen to and buy that music.

So now the music world has to figure out where it can possible go. It’ll be difficult to create another gadget that could successfully compete with the iPod. Though perhaps that’s what the manufacturers of the Walkman were thinking too.

What will truly be harder to beat is the innovative spirit Jobs left behind. When will there be another revolution in the music world that could possible compare to the one he spearheaded? It’s difficult to fathom the music undergoing another radical change but even if it does, it is unlikely that Jobs’ contributions will be forgotten. His daring will perhaps be what jumpstarts the next big change in the music scene.

So when you plug your iPod in to charge or plug yourself into your music, think about how it wasn’t always like this – the ease of downloading a song, taking it anywhere with you (especially since iPods tend to be so small) and accessing almost anything and everything you could possible want to listen through to a pair of earbuds.
Article posted on 10/17/2011
This article has been viewed 1225 times.