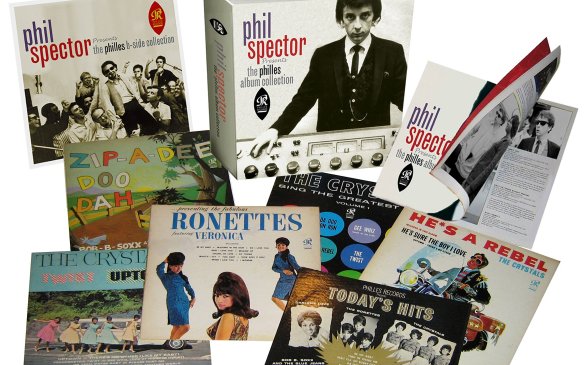 There’s a big chunk of the populace that knows Phil Spector only as the wild-wigged jailbird currently in the slammer on a murder charge. Spector made big news in the nascent days of rock ’n’ roll though, famous for working with some of the earliest girl groups and for his “Wall of Sound” recording technique.

This seven-CD collection gives fans a chance to hear how Spector’s style progressed through three albums with the Crystals, the Zip-A-Dee-Doo-Dah album by Bob B. Soxx and the Blue Jeans and Presenting the Fabulous Ronettes featuring Veronica with the classic “Be My Baby.” Those and an additional disc contain big hits like “Then He Kissed Me,” “Da Doo Ron Ron,” “He’s a Rebel” and “Wah Watusi,” but the hidden gems of this collection are found on Phil’s Flipsides, a somewhat humorously-titled (considering that Spector ended up flipping his lid) collection of instrumental B-sides and one-offs featuring cuts like the surf-rockin’ “Walkin’ Along (La La La),” the short-and-twangy “Git It” and the jumping jazz of “Harry (From W. Va.) and Milt.” All of this material was originally released on Spector’s own Philles Records.