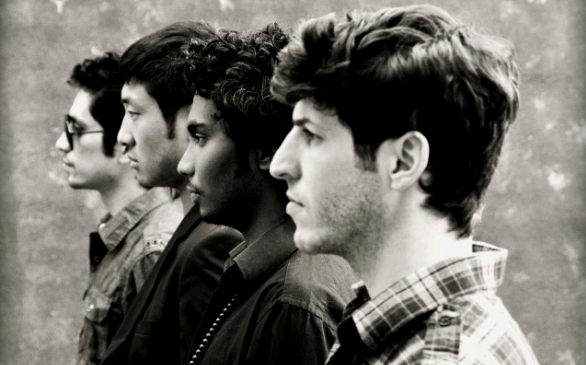 Mind the Gap Keeps Up The Good Fight

Multi-cultural electro-rock band Mind the Gap describe themselves as “A Korean, a Sri Lankan, a Mexican and a Jew from Cleveland.” If you’re therefore wondering just what their new album, The Good Fight, sounds like, here’s your chance to find out. The foursome has a Monday night residency going at the Bootleg Theater during October, and they’ll be performing there on the 24th and again on Halloween on the 31st. The whole deal is easy on your wallet, too; all of their residency shows are free.

You probably would have never guessed that someone like cellist Yo-Yo Ma would be involved in a recording called The Goat Rodeo Sessions. The title is actually a phrase used in the aviation industry to describe a high-risk situation, but mandolin player Chris Thile, who along with Ma, Stuart Duncan and Edgar Meyer comprises the players on this project, thinks the words apply equally to the foursome’s music.

“We get a lot of pressure in arrangements that have just enough twists and turns that you really can’t let your guard down; each little thing has to go right,” adds Meyer. “If I trip up one thing that’s going to throw Chris, and then that’s going to throw Yo-Yo, and then Stuart’s going to have to make up a whole new part because he’s not going to know where we are from what just happened.”

Some of the most incredible world music that you’re likely to hear this year is contained in the new Kiran Ahluwalia album, Aam Zameen: Common Ground. Indo-Canadian singer Ahluwalia has previously incorporated everything from fado to Celtic to Afghani rhubab into her music; here she fuses contemporary Indian song with the sounds of Africa by collaborating with hot Malian band Tinariwen, Tuareg tribesmen Terakaft and Gambian ritti player Juldeh Camara. Ahluwalia’s husband (jazz guitarist Rez Abbasi) also plays on the album, and you’ll have a rare chance to hear this music performed live when Ahluwalia plays the Mint on Nov. 14.

It’s just about time for the Fearless Friends Tour to come through town, and this year blessthefall gets the headlining slot. Also on the bill are the Word Alive, Motionless in White, Tonight Alive and Chunk! No, Captain Chunk! The groups have it in common that they record for Fearless Records; catch them all Nov. 10 at the Roxy and Nov. 12 at the Glass House.

Just in time for Halloween comes the first full-length album from the Marshmallow Ghosts. The band, who say they are from Hell, Mich., features a revolving cast of characters that like to keep their identities secret although it is known that Ryan Graveface of Black Moth Super Rainbow is the ringleader of the group. The mysterious bunch has made an album-length music video called Corpse Reviver No. 2 to accompany the album, but keep in mind that the Marshmallow Ghosts are actually a pop band and their self-titled album, available now, is creepy only in a completely cool way.

In honor of their 10th anniversary, EMI Virgin Records is releasing a Gorillaz singles collection that’s cleverly titled The Singles Collection 2001-2011. The career-spanning set will include Gorillaz singles, videos and remixes of “Clint Eastwood” and “19-2000” along with “Stylo” and a dozen other favorites. The Singles Collection comes as a standard CD, CD with DVD or on 140-gram vinyl and hardcore fans, and vinyl freaks will want to seek out the import-only seven-inch vinyl special edition. All configurations drop on Nov. 29.

Want a pair of Sunny Bak-designed Converse sneakers featuring never-before-published photos of the Beastie Boys? MCA is featured on the right sneaker and Mike D and Ad-Rock are pictured holding up a bottle of Mad Dog on the left sneaker while Bak’s signature is on the tongue of each shoe. Find them on eBay and expect to pay around $200 a pair.