Anthrax: Worship at the Altar of Music 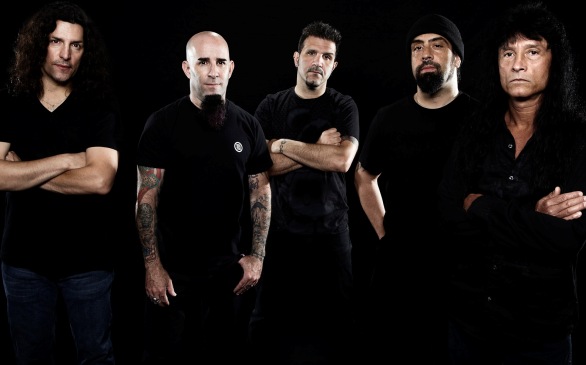 First off, you should go get the new album, Worship Music, from Anthrax. Even if you’re not a huge fan, you will be after hearing it. The production is amazing, and the songwriting is at the top of the game. Arrangement on each song is careful and layered with a lot of time and thought. I was not expecting such a refreshing sound from a band that has held its own style for so many years.

This album feels like the band re-booted itself, and in a way, it kind of has. With original frontman Joey Belladonna back in place, it was just a matter of time before things started to click.

“For me to be on the record and finally get one out is a very exciting thing. It felt good to go in there and record. It was a really smooth process. I think everybody’s influences have mustered up into a heavier twist. Even vocally, I don’t know if I tried to do anything heavier, it’s just how it came out,” comments Belladonna.

The point about the album being heavier on all levels isn’t just talk. The sound literally rattled my speakers, and hearing Belladonna and Scott Ian trade vocals in a few songs is pure metal magic. Ian’s voice is so tough that you almost feel like they were yelling at each other during the recording process, but that was far from the case as Belladonna explains.

“No one was there except for me and Jay Ruston. It was great. Less pressure. It should be comfortable and relaxing. You miss a cue or overdo a line, you don’t have people in there sitting reading a magazine,” he says. “If you’re alone, you can disregard that. It was my favorite time. There are a lot of distractions, and you don’t need it. It’s so much easier to just do it.“

So, now that they have a new album, what about the live show? The band just played two U.S. dates for the Big 4 alongside legendary bands Slayer, Megadeth and Metallica.

“The Big 4, it felt nice. Just to get up there and do it again. But to be Anthrax the band again and kick it off with that speed and overwhelming professionalism, it really is just a fast car and it’s amazing to be out there doing it,” Belladonna shares.

He goes on to talk about all the new fans: “It’s so great to see new faces out there. I know what it would be like to see something like that and absorb it for the first time. It must just be awesome for these kids.”

What about the influences that led to this kind of music? What is it that keeps Belladonna growing musically as a singer?

“I’m into all kinds of music. Not one style of music really. I gain from listening to all kinds of stuff. I get inspiration from something mellow, like John Mayer, I’ll hear something in it. I come to Anthrax with nothing in particular, and I walk into the album cold with lyrics in hand. And I just sing with no influence outside. I’m more natural about it,” he explains. “You have to have your own style, and I wouldn’t want to change anyone in the band to do something different. I love the way they drive a song, and we become a band that way. You can’t mold it, you can’t describe it.”

This is just a little insight to what’s going on with Anthrax and the state of metal today. These guys are going out there and playing from their guts and evolving and with it; we as listeners are changing, too. Anthrax will be touring with co-headliners Testament through winter. Be sure to catch this out-of-control show before it passes you by.