Everyday Sunshine: The Story of Fishbone: Lifestyles of the Famous, but not Rich 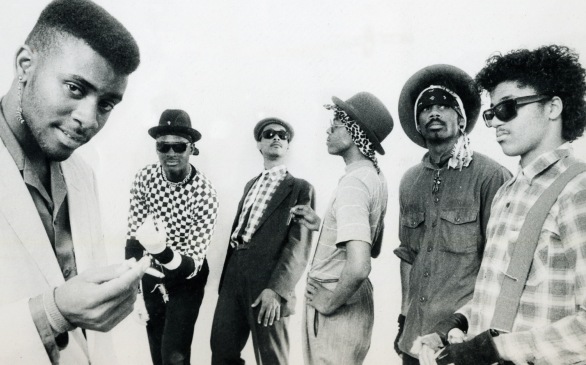 On the surface, Everyday Sunshine harks back to Fishbone’s heyday when it seemed destined to be as successful, if not more so, than the countless bands it influenced. But as the band members’ reminiscences progress in the documentary, the title takes on a deeper meaning.

“I look all around me, and all these other artists and musicians that are famous and rich, they seemingly have all they need in life,” vocalist Angelo Moore says of the artists – like Red Hot Chili Peppers and No Doubt – whom he has helped to influence. “But you gotta be thankful for the music and your gift to be able to free people from the boundaries of the society we live in.”

When Fishbone exploded onto the L.A. music scene 25 years ago, it pushed the envelope of originality to the point of bending it. Fishbone rode high on the buzz it created locally and sensed they were on the brink of making it with their seminal 1991 offering, The Reality of My Surroundings. The reality, however, is that they didn’t.

The band who never compromised to fit a genre was suffering the consequences of its stubbornness to defy any sort of category. The teenage dreams of stardom they had just after graduating from high school faded with the years as Columbia dropped them from the label because of lack of commercial success. It eventually led to the departure of founding members Chris Dowd and Kendall Jones.

“It has definitely gotten dark in Fishbone,” Moore reflects. “When you get to the end of the road and you’ve got shit and you see your managers and record company executive and they’re living in a nice house and you’re still struggling to pay rent on an apartment, that right there can discourage you.”

As Fishbone ditched its gleeful optimism and ventured into harder rock, it also got further away from the large music venues it used to play. Everyday Sunshine takes a grim turn when it focuses in on Moore’s life as he loses his apartment in North Hollywood and is forced to move back in with his strict, Christian mother. Most inspiring, however, is the remarkable optimism Moore seems to show – or fake – throughout.

“In spite of [everything that has gone wrong] and miscommunications here and there, there is still a higher power that gets you over the hump regardless of all that shit,” Moore says.

Moore is reduced to taking the Metro Orange Line to get around, having father-daughter conversations while he’s thousands of miles away and pasting on a smile for dwindling audiences, all the while feeling that his contributions to the band fall short to bassist Norwood Fisher’s direction.

The documentary recounts the riots of 1992 and their influence on the band members. Fishbone’s iconic “Fuck Racism” shirts take on a deeper meaning as they explain their loss of faith in the justice system following the acquittal of the officers who beat Rodney King.

The film’s strong social commentary continues as it dispels the notion that rock stars live a lavish lifestyle and have it made. It brings a humbling humanity to Fisher and Moore who have given up their entire lives – even Moore’s marriage – to make the band work.

“If I wasn’t touring all the time trying to make something out of nothing [with Fishbone], I’d probably spend more time with my daughter,” Moore says. “I gotta go out and work it and make money because Fishbone is living the lifestyle of the famous, but not rich.”

Whether or not Fishbone can ever reclaim its ’90s glory is up for debate. It wasn’t too long ago that Pearl Jam was written off; it took the 2006 self-titled album to catapult the band back into our consciousness.

Fishbone has just released a new EP, Crazy Glue, this week, and it’s not too much of a stretch to believe they can finally achieve the level of success they deserved in the first place.

“We’ve stuck together through the thick and thin, but like Funkadelic, Fishbone is a dysfunctional operation,” Moore says. “With all the people leaving and coming into Fishbone, as dysfunctional as it is, the only thing I can think of that can hold that shit together is crazy glue!”