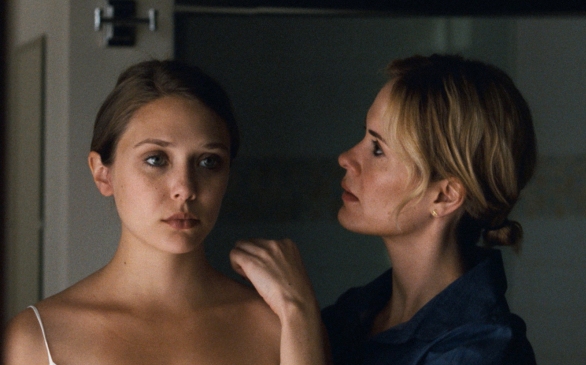 Walking into a small conference room in a West L.A. hotel on a Friday afternoon are three familiar faces: Sarah Paulson, whose long list of credits in Broadway, television and film reads that of a veteran Hollywood actress despite her age (a mere 37); John Hawkes, whose Academy Award nominated performance in last year’s Winter’s Bone had created a much deserved buzz around his serious talent; and finally, 22-year-old Elizabeth Olsen, whose name and looks ring familiarity like the previous two, but don’t quite stir up immediate recognition.

It may be because she has the last name and facial features of a famous set of twins, but she sure doesn’t go by Mary-Kate or Ashley.

Standing at five-feet, seven-inches in a silk dress that could easily take her to a red carpet evening photo-op, the younger Olsen sibling has the demeanor of someone wise beyond her years. It could be because we don’t see her between the ages zero and 10 playing Michelle Tanner in “Full House” reruns, or it could be because of her deep, womanly voice that her more petite sisters don’t have. Olsen isn’t a fashion designer or a tabloid mainstay, just a serious young actress on the verge of her first big break.

“I never stopped to think about it,” director Sean Durkin says of casting the well-connected Olsen as the lead star for his indie thriller Martha Marcy May Marlene.

“It obviously crosses your mind, but it wasn’t really anything that we really focused on. I just knew that she was the best ... We wanted an unknown actress, and she was one of over 50 to audition. I didn’t know what I wanted until I saw what she did. She never felt like she was trying, and she conveyed a lot with her eyes.”

Despite the long title, the movie concerns a single young girl named Martha (Olsen), who escapes from a cult living in the Catskill Mountains, led by Hawkes’ character, Patrick. With nowhere else to go, she then finds herself in the Martha Stewart-type lake house of her older sister Lucy (Paulson), who is now married to a successful New York City British architect (played by Hugh Dancy).

Tension ensues as Martha is haunted by her disturbing experiences in the cult, which the audience sees through eerie flashbacks. She has trouble adjusting to normal, acceptable behavior (At one point she lays down on the husband and wife’s bed while they’re having intercourse.), and the couple, who are never let in on her past, struggles to understand her.

“I was really young and naive, and I just really wanted the job,” Olsen laughingly admits.

A student at the Tisch School of the Arts and the Atlantic Theater Company, the actress, despite her insistence on being driven by youth and naiveté, ended up with one hell of a difficult character to play for her first feature film. And already with a murmur of some Oscar buzz, anyone who has seen the film can’t deny that the girl has some serious potential.

“I wanted to be exhausted,” explains Olsen. “The swimming parts … I don’t really like water that much to tell you the truth. I’d rather be hiking and be in the desert. Beaches and lakes are the most appealing [to her]; Martha finds peace and comfort in the water. I had to swim a lot, and a lot of it wasn’t even in the movie. The reality of that was more surprising than anything else.”

Having already premiered at Sundance, Olsen is prepared for the rest of the world to see her impressive effort.

“I’m really excited to have the general audience see it and not just people who go to festivals and journalists – people who are true film lovers. It’s a new cinematic experience. It’s something that we’re not used to. Like my father ... I thought that he was going to be frustrated that the movie wasn’t tied up in the end,” Olsen says, referring to Martha Marcy May Marlene’s ambiguous ending.

“But he likes it, and not just because I’m his daughter. He thought it was an interesting story. I hope that other people who just like going to movies will have that experience.”

With her exceptional performance and zeal, audiences will follow her emerging career, and not just because she’s her siblings’ sister.