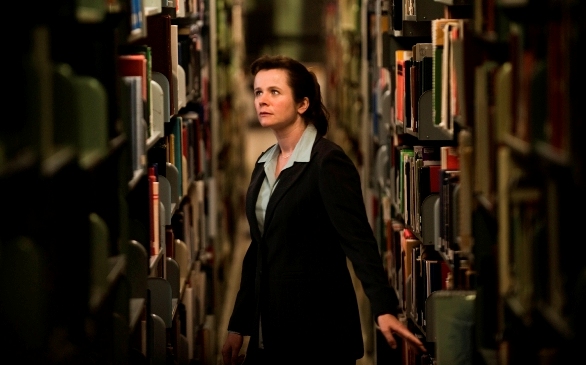 “It’s an amazing story; it’s just very, very powerful, compelling stuff.” Those were the words of Emily Watson (Breaking the Waves, Punch Drunk Love), star of the new biopic film Oranges and Sunshine that is sure to wow critics during award season. Sitting down with Watson, whose explosive energy was infectious as she talked about the film, she schooled me on possibly the largest recent social scandal to rock Australia and England.

The “child migration scheme,” where thousands of poor and orphaned children were shipped unaccompanied from the United Kingdom to Australia with promises of a land of “oranges and sunshine.” Instead, they received systematic abuse from secular and religious institutions.

Hence the title of the Australian/British co-production Oranges and Sunshine, which tells the story of social worker Margaret Humphreys who uncovered the child migration scheme and helped thousands of misplaced individuals find their identities. Watson does an incredible job playing Humphreys, whose involvement began when a woman came to her with one request: “I was sent to Australia from England as a small child without parents or guardians, and that’s all I know. Can you help me?” Humphreys’ first reaction is disbelief.

Watson was also surprised to hear about the migration scheme.

“I hadn’t heard of them at all, and I think it’s been a very, very little known fact,” she shares. “It’s better known in Australia obviously because the migrants are there, but in England, no, I’d no idea. Now it’s coming much more into the public eye because of the apologies in both countries.”

Producer/director Jim Loach sees it as his duty to inform as many people as possible to the subject through the film.

“For additional information, there’s Margaret’s book [Empty Cradles] and various documentaries, but for me the most important territory is the emotional stuff and that comes from having your own family and children,” says Watson. “It’s just putting you in to that imaginative area of what it would be like to be dealing with all this stuff. There is something utterly compelling about the thought of your own child being abandoned and deported and sent to an abusive children’s home for 10 years.”

As Humphreys starts following the trail and uncovers this incredible story she realizes that the woman is just the tip of the iceberg. When she first starts looking into it in the 1980s, her boss says to her, “Do you want to take a year or two to do this?” It has been her entire life ever since then; it’s taken an incredible toll on her physically, mentally and emotionally. She tells herself that she’s keeping her distance, that she has boundaries, but in fact, she is diagnosed with post-traumatic stress disorder because of the emotional impact of all she discovers.

Oranges and Sunshine’s dual English and Australian settings contribute to the overall mood of the film.

“We had many scenes we filmed in Nottingham in November, and it was pretty cold. All the Australian crew were shivering and complaining! It starts getting dark almost after lunch and the light is so completely different from Australia,” says Watson. “But I think that really reflects the nature of the film, the nature of the story and that sense of dislocation that a person must feel who’s constantly traveling between the two – it was tough”.

This paints for a detailed cinematic picture that tugs at your emotional heartstrings.

“The film is about bearing witness to the terrible abuse of innocent children that could have gone without notice,” says Watson. “And it’s about one person’s fight to have that story known and to give those people some sense of identity.”

Watson’s intensity truly shines on screen, and she should be a definite Best Actress choice once awards season comes around.