Primus: Two Full Sets in One Night at the Wiltern 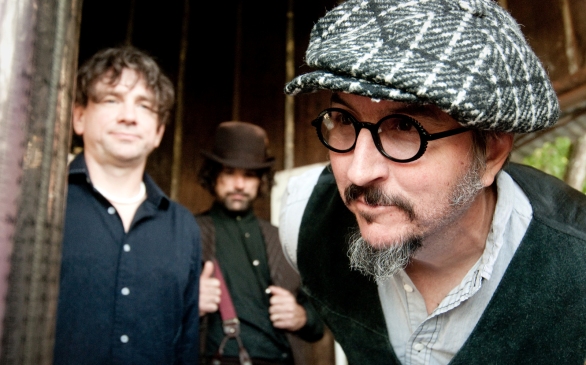 Last month, Primus released Green Naugahyde, their highly anticipated first full-length record in 11 years. The album captures the quirky and irreverent style they established in the ’90s, which clearly still works in the new millennium. Les Claypool’s funk and groovy basslines and Larry “Ler” LaLonde’s psychedelic solos fit perfectly with drummer Jay Lane, who returned to the lineup after a 20-year absence. But fans shouldn’t expect the next album to have another 10-year gap, explains LaLonde as he prepares for their month-long U.S. trek.

Even with the long gap between albums, Primus maintained a busy schedule since launching the Oddity Faire tour two years ago, which included full-length album performances across the country.

“At the time, I think it was something that people were really excited about,” shares LaLonde. “Fans are always asking us to play specific songs, so once they knew we were playing a full album, they definitely knew for sure they would hear some of those songs. It was cool for us because we became really good at playing those songs since we normally mixed it up a lot. But we definitely honed in on those songs.”

After touring for their Antipop album in 2000, they took an unofficial hiatus lasting three years until hitting the road for their Hallucino-Genetics Tour. Following a string of successful tours performing classic songs, a new album became inevitable.

“When we toured in ’04 and ’06, we always spoke about creating another record,” says LaLonde. “Les and I didn’t want to be just another band from the ’90s who played old songs, we want to be a real band and keep moving forward, which lead to making another album after we finished touring last year. So before launching another tour, we said lets not even do this unless we’re going to be a real band and make another album. ”

The latest addition to the lineup reintroduces Lane behind the drums. Although his initial presence was brief, his musical sound and style still influenced most of the early records.

“He’s an interesting player as far as a drummer, he listens a lot and is open to trying something different without taking it personally, like I do,” laughs LaLonde. “He was in the band up until we released our first record, so he had a fair amount to do with the writing. But as soon as he came in, we had chemistry right off the bat. He’s fun to work with, creative and inspiring. He listens to what you play, and plays off of what you play.”

Aside from incredible bass solos and rapid guitar riffs, the bizarre factor in Primus’ music has been their lyrics and song titles, and fans shouldn’t expect anything less from the new album. But slight themes and influences are greatly detected this time around, especially during the song “Eternal Consumption Engine.”

“Some of the album relates to the country’s current economic status, especially that song,” continues LaLonde. “When we drive around the country, we see abandoned stores and people are out of jobs, because jobs have moved overseas. I’m pretty sure Hot Wheels were made in the United States, but now they’re made in China. I don’t mean to be political or social, I’m just saying these things are happening. On a personal level, I hate to see things that came from America move to another country over money.”

Their current tour, An Evening With Primus, includes an 18-date trip across the country, which ends at the Wiltern. Each night features different performances, lasting over 20 songs.

“Our plan going into each city is to play two full sets,” reveals LeLonde. “I know there are a few bands out there playing full albums as well, so hopefully it’s still a cool thing. We’ll start off with a bunch of songs we feel like playing that night, and the second set will be all of Green Naugahyde. It seems people have been excited to hear the whole album live. If people still want to hear more after the second set, we’ll dig around and see what we play for an encore.”