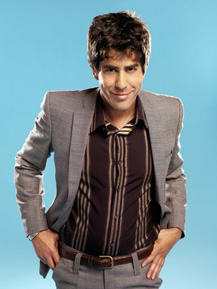 Untitled Document In the entertainment industry, it used to be that big-screen actors stayed on the silver screen and only graced the old boob tube for Emmy-nominated guest appearances. However, times are changing, as illustrated by the new comedic legal drama "Head Cases."

Starring former silver-screen "It" boy Chris O’Donnell (Batman Forever, Scent of a Woman) and the versatile Adam Goldberg (A Beautiful Mind, Saving Private Ryan), the series focuses on two unlikely partners at a law firm who are partnered together by their mutual therapist after three months in a wellness center. As the duo prepares to take on various underdog cases, they learn to deal with each other as they work to get their lives back on track.

Goldberg can understand why critics may compare the legal dramedy, which is airing on Fox and debuting at a time when audiences are searching for a new fall series show, to "Ally McBeal," despite its differences.

"Tonally, it feels different," Goldberg states. "To me, it almost has a ‘Monk’-like feel to it. Yes, there are legal cases, but the show deals with the personality disorders the two main characters have. But I guess it’s not unfair to say the show fits similar shoes because of the genre it’s in."

In the series, Goldberg plays Russell Shultz, an unkempt, unpredictable low-rent lawyer who suffers from explosive disorder. Goldberg says he pulled from his "own well of dysfunctions" in preparing for the role, immersing himself in another character who let his passions get the best of him, comic Lenny Bruce. Goldberg says that as the series progresses, audiences will "get into the meat of the character and see his different sides."

"I’m not nervous so much as I am hopeful," Goldberg states. "I’m enjoying doing this. There’s so much more to work with since the series isn’t so much an ensemble as it is just the two of us. Maybe I’m just so tired there’s no time to feel weary, but I guess I do feel a certain sense of responsibility, since it is just the two of us, on how the show comes across. I don’t want my character to be a one-note guy – I want people to see the different textures to him."

Although Goldberg is new to starring in his own series, the actor says he’s done enough guest spots on television before to feel like he’s starred on both the small screen and the big screen in equal measure. The 34-year-old actor admits that he finds himself coaching O’Donnell on the television process since the experience is completely new to his co-star, who turned to the world of television in order to be closer to his wife and two kids. When it comes to Goldberg, though, he says he’d be happy pursuing film or television, although he does prefer one medium over the other.

"Usually I’ll go with whatever’s happening in that moment, whether it’s a good television role or a great script," he states. "I’m sure it would be easier on the old ulcer if I planned things out more, but it doesn’t always work that way. Honestly, though, making films – especially how my last film was made (the November release I Love Your Work, which Goldberg co-wrote, directed, produced, edited and composed the original score to) – that whole all-encompassing aspect of it, that’s what I feel like I’m really supposed to be doing."

For now, though, Goldberg is simply doing whatever it takes to promote "Head Cases" – including press interviews on his one day off – to make sure the series doesn’t get lost in what is rumored to be one of the most competitive fall TV seasons in recent history.

"There are quite a lot of procedural shows coming out, but I think ‘Head Cases’ is unique in that it’s an hour-long, character-driven show," he says. "It has this strong, irreverent comic sensibility to it that you typically only see in 30-minute sitcoms. It deals with people and relationships, and not just the legal system and crime world. Really, though, funny is funny, and I think this is funny."