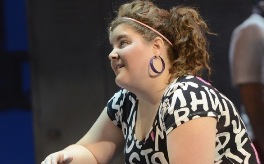 Bridget (Ryann Redmond) in “Bring It On: The Musical”

After five cult-ishly beloved films which spawning such memorable quotes as: “She puts the ‘ass’ in ‘massive,’” “You were having cheer sex with him” and “Missy’s the pooh – so take a big whiff!” Bring It On, the tale of high school cheerleading bringing opposing forces together into one grand human pyramid of love, has been transformed into a musical that bows at the Ahmanson at the end of the month.

An amalgamation of all five Bring In On films, from the original in 2000 to Bring It On: Fight to the Finish in 2009, the play, just like all the film’s sequels, introduces a new cast of characters who follow a similar path initially taken by Kirsten Dunst and Gabrielle Union. One of the players new on the scene is Bridget, a character originated by Ryann Redmond.

Speaking to Redmond as she waited to board a flight from her native Atlanta, Ga., where the show had its world premiere, to Los Angeles, the 22-year-old describes her role as, “the nerdy overweight girl they won’t let on the squad, so I’m the mascot at the beginning. Then I get transferred to a school on ‘the other side of the tracks,’ and they accept me for everything that I am, let me on their dance crew and I get to blossom and find my way.”

Think of it sort of as Hairspray meets Step Up 2: The Streets.

Redmond has been with the production for two years, ever since the first reading, which lasted about a week and seems surprisingly unremarkable when she describes it: “We sat there and read from the script for a few people.” Still, it was the chance of a lifetime for the former NYU student who landed the role of Bridget during her junior year of college. Rather than graduate with a degree in theater, she dove head first into the industry, going from “Bring It On: The Musical”’s first reading to the workshop production, Atlanta premiere and now her current role in the inaugural touring company.

Working in Atlanta was a moment of triumphant hometown glory for the southern girl. “It was awesome!” she gushes. “My mom could not have been any more excited. She saw the show about 20 times, and we were only here for five weeks. If she could come on tour with us, she would be the happiest woman alive,” she adds with a laugh.

Over the years, Redmond says, “I’ve gotten to mold my character, and she’s really become a part of who I am,” but she never takes for granted just how lucky she is to be part of the musical’s maiden voyage. “The creative team is amazing. It’s all-star, with a whole bunch of Tonys, Grammys and Pulitzers.”

She isn’t kidding, the show’s score was co-written by Tony winners Lin-Manuel Miranda (“In the Heights”) and Tom Kitt (“Next to Normal”), and the book for the musical was written by Jeff Whitty (“Avenue Q”).

The young triple threat is also incredibly grateful to have the chance to play a character who gets to stand front and center without fitting into traditional expectations and definitions of beauty.

“In this business, so often it is about being blonde, skinny and gorgeous,” says Redmond, who falls more into the Bette Midler or Nikki Blonsky school of spunky adorability, but championing inner beauty is a major theme in “Bring In On: The Musical.” Asked if there is a “Glee”-ish sensibility to the show, Redmond ponders for a moment.

“I guess you could say that, in the respect that we’re in a high school and we’re breaking out into song,” she chuckles. “I could see that they’re similar in a way, [because] it’s all about doing your own thing and acceptance.”

But “Glee” doesn’t have dancers who fly through the air in any manner of tuck and rolls, all the while working without a net. Though Redmond says the show has been (luckily) unmarred by injury, it’s a dangerous, exhilarating viewing experience and, thanks to a newly added stunt in the finale, she gets to be a “flyer” as well.