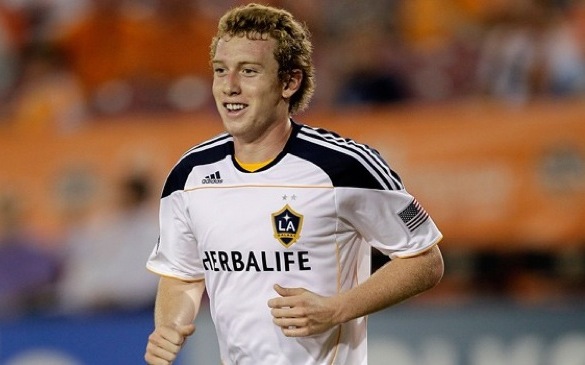 Jack McBean scored his first career goal for the Galaxy on Sunday.
(Credit: lagalaxy.com)
The L.A. Galaxy ended the 2011 campaign with a loss to the Dynamo in Houston, Texas by a score of 3-1 in their season finale Sunday with over 30,000 fans in attendance. Despite the defeat, the Galaxy (19-5-10) still grabbed the best record in all of Major League Soccer. They could play for the MLS Cup in their home field.

“I think Houston’s first goal was brilliant. You have to give Moffat credit for a terrific goal. I thought the second goal broke our backs. Tonight was a good experience for some of our young players. It was good to get Sean Franklin back on the field,” Galaxy head coach Bruce Arena says.

Houston got its first lead when Adam Moffat scored in the 27th minute. Bobby Boswell followed three minutes after the second half began, while Carlo Costly netted his first goal in the 74th minute.

David Beckham, Landon Donovan and Juninho – who are all regulars to play on the pitch – practically had the game off as they rested for the upcoming playoffs.

“You never want to go into games and come out on the short end, but it is what it is and I think we earned the opportunity through our previous 33 games to give our first team guys a rest,” Arena says. “As much as I’m disappointed with the final result, I’m pleased we got something out of it and hopefully it helps us down the road.”

Los Angeles also had one of its own young players score his first career goal. A 16-year-old, Jack McBean, nailed L.A.’s lone score in the 88th minute.

“I was happy to score, but it was bittersweet because we didn’t get the win,” he says.

The Galaxy now await their postseason opponent, which could be Colorado, Columbus or New York on Sunday, Oct. 30.