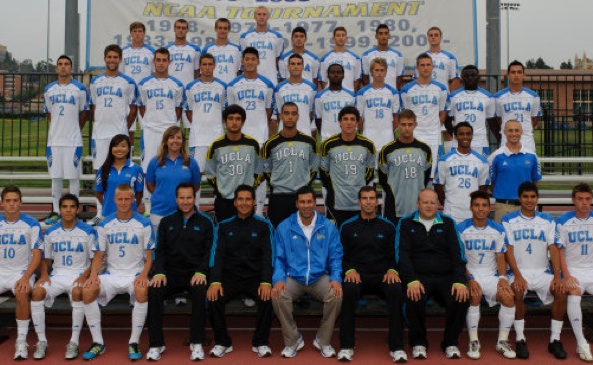 (Credit: uclabruins.com)
On a rather chilly night in Westwood’s Drake Stadium, the visiting Cal State Northridge Matadors captured a 3-2 victory over the host UCLA Bruins men’s soccer squad Saturday. The non-conference win helped CSUN improve their record to 7-7-1. Meanwhile, the Bruins dropped to 10-4-1. Before the game, UCLA was ranked in the top 10.

UCLA seemed to have control of the game initially, beginning with their high-powered tempo of touching the leather. In the first half, it was rather rare for the Bruins to lose possession of the ball.

However, the Matadors found the back of the net first. Christian Gonzalez collected his third goal of this 2011 campaign with 33:11 on the clock. After receiving a pass, Gonzalez found himself inside the box and released a right-footed shot that reached for a score. UCLA’s Chandler Hoffman scored twice in back-to-back goals for his 12th and 13th scores of the year. Hoffman did so within a span of five minutes, which gave UCLA a 2-1 lead going into halftime.

The near 1,000 fans in attendance perhaps thought the game was over, but it really was not. CSUN knotted the scoreboard when Brian Behrad scored with less than eight minutes left. Then, Edwin Rivas gained his fifth goal with less than four minutes to go to give the Matadors the game-winning goal.

UCLA almost came back to tie the game, but it was just too little, too late. They made it exciting though, especially because of their need to penetrate the goal in the closing moments. CSUN outshot the Bruins 11-8.

Bruin fans were left speechless. And the CSUN followers, well, they just kept cheering and screaming because of the upset.

The Bruins next face the Washington Huskies on Friday, Oct. 28, at 7 p.m.