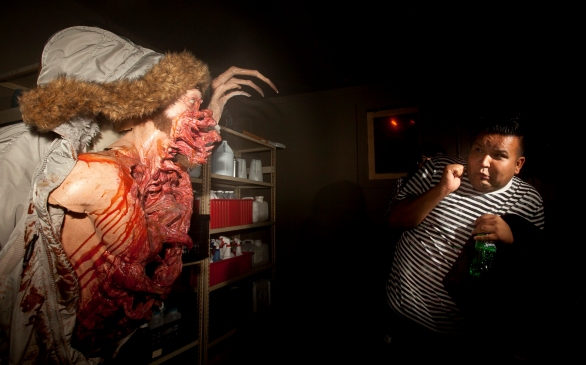 Not only can you see two of the year’s hottest acts, but you could win the biggest costume cash prize in Los Angeles – $10,000. Plus proceeds benefit Stand Up to Cancer and Break Away From Cancer. 8 p.m.

Danzig can be seen as the third stage in Glenn Danzig’s musical career, preceded by the horror punk bands the Misfits and Samhain. All three will be performing – plus, special guest Corrosion of Conformity. 7:15 p.m.

Two floors of a maze-like atmosphere with hundreds of celebrity wax figures, along with hundreds of costume clad partygoers dressed as their favorite dead (or still living) celebrities. For one night only, Madame Tussauds will be transformed into the ultimate dead man’s party. 10 p.m.

EEK! at the Greek

A 60-piece symphony will present an array of music to celebrate the season and the iconic venue’s 80th anniversary including a creepy collection of frightening favorites like Night on Bald Mountain, Danse Macabre and music from Psycho. Plus there will be the world premiere of a musical composition by Arthur B. Rubinstein, accompanied by a reading of Edgar Allen Poe's gothic masterpiece – “The Tell-tale Heart.” 7 p.m.

Everything you love about Magic Mountain, plus haunted houses, mazes, scary shows and street entertainment. And you can go on all of your favorite rides in the dark.

The adrenaline-packed party at the CAF SoCal wing’s airplane hangar surrounded by the historical WWII Warbird planes from their Ghost Squadron fleet will feature a catered dinner, beer, wine and tasty treats available for purchase all night, plus live performances by ’80s hair metal band White Leppard, Nawgahyde, which features members from Guns N’ Roses, Alice in Chains and L.A. Guns, and DJ sets throughout the evening. There’s a costume contest, as well as additional prizes for simply attending and using social media to “check-in.” 8 p.m.

A monster mashup spooktacular with free exclusive limited-edition Halloween Booootie CDs for the first 300 people in costume, plus a Midnight Costume Contest with $100 cash prizes (and a trick-or-treat goody bag) for each of the best costumes in three categories: Best Overall Costume, Scariest Costume, and Best Mashup Costume. Bootie LA’s resident dance crew R.A.I.D. will be on hand for a Midnight Mashup Show performance of Michael Jackson’s “Thriller” dance. 9 p.m.

Experience four new mazes based on the most popular horror themes and movies of all time – The Thing: Assimilation, Hostel: Hunting Season, Alice Cooper: Welcome to My Nightmare, House of 1000 Corpses in 3D Zombievision (created by horror expert Rob Zombie) – and much more!

You can venture through the Adventure Corn Maze, or maybe take a spooky journey into the Haunted House or Haunted Trail or Haunted Hayride. For those looking for something more extreme, the Halloween Harvest Festival takes on a more sinister persona after dark.

Learn all about death and mourning etiquette during the Victorian era and participate in a funeral inside a historic home. Find out about Victorian Spiritualism – what it was, who followed it and why, and perhaps have your future foretold by a medium. See how other cultures celebrate and remember their loved ones as we look at the Mexican traditions and customs of Los Dias de los Muertos, or Day of the Dead. Finally, discover how even the intricate details of clothing played a role in how Victorians showed their loss of a loved one. Noon.

Did you know the Los Angeles is the No. 5 most haunted city in the United States? Discover these ghosts as you team up to uncover the haunting secrets of Hollywood. Up to six people per team; starting location revealed upon registration; Prizes to the top three teams. 6 p.m.

The granddaddy of all Halloween amusement park events reaches its 39th year with an unlucky 13 mazes. Make sure to catch the gut-busting comedy show “The Hanging” and watch out for monsters creeping around the theme park ready to scare you at every turn.

Zombie Central – on the Promenade, between 3rd Street and Ocean Boulevard – is where all the festivities will be happening, including makeup artists, food, beer garden, art, vendors, live music and muralists at the Tinderbox. Rock out to a live set by Buskerfest-winners Wild Pack of Canaries at 9 p.m. (more bands to be announced). Also new is the separate-admission, all-ages concert event, “Dead Man’s After-Party,” featuring a live performance by the ultimate Halloween band, Johnny Vatos’ Tribute to Halloween (with members of Oingo Boingo), at the Historic Press Telegram building, between 6th and 7th on Pine Avenue. Gates open at 8 p.m., where you can enjoy food trucks and beer gardens, followed by the World’s Sexiest Zombie contest (with celebrity guest judge, Rena Riffel from Showgirls and Mulholland Drive).

The gloriously unhinged mix of Mexican-style lucha libre wrestling, traditional burlesque and blow-by-blow comedic commentary will blur the lines between reality and fantasy this Halloween with luchadores, a contortion team, tassel-twirling sex kittens and no-holds-barred comedians.

LACMA invites you to a funeral – YOURS! Join a ghoulish cast of friends and fiends as they pay last respects to the dearly departed with a Dead Man’s Ball. Performances by Killsonic, Jeremiah Red and Sneaky Nietzsche and environments created by Sypher Art Studios will be sure to rock the house and raise the dead. Dress to impress in your funerary best or a costume of your choice, as they conjure up a night full of art, music, dancing and, of course, the annual costume contest. Prizes will be awarded to the Best Tim Burton Character, Best Movie Monster and Most Creative. They’ll keep the Tim Burton exhibition open late, so come by for a final viewing before it expires forever on Nov. 1. 8:30 p.m.

Be all highbrow and get stupid with performance art, music, video, theater, drinks and dancing. This anti-art house of horrors is the antidote to the cool kids Halloween party. 9 p.m.

The city of West Hollywood becomes California’s seventh largest city for one night as hundreds of thousands of revelers turn out in outrageous costumes (or to watch those who are) at the world’s largest Halloween street festival. One of the stages of the event will be devoted to The Rocky Horror Picture Show 35th Anniversary. On Santa Monica Boulevard, between La Cienega and Robertson. Not for children. 6 p.m.