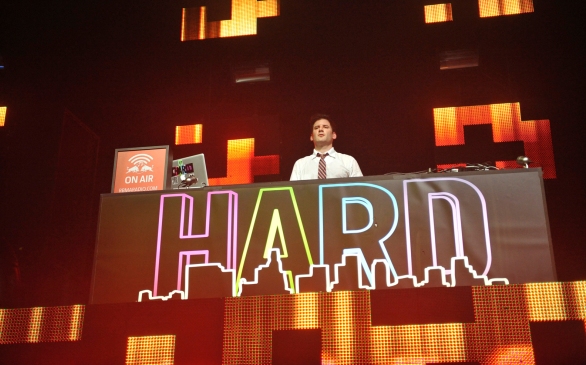 Get ready to break out that psychedelic costume and be sure to drink plenty of water because Hard Haunted Mansion is back for its fourth year running. Taking place at the Shrine Expo Hall just outside the USC campus, HARD Haunted Mansion is the definitive event for all those looking to celebrate All Hallow’s Eve with a night of spine rattling audio splendor.

“I’ve always loved Halloween,” says Gary Richards (aka Destructo), HARD’s founder and current producer. “Halloween is a great holiday because everyone gets to dress up and act crazy.” He claims that ‘the HARD crowd’ already possesses an affinity for dressing up and acting crazy, which is exactly why this event seems so exciting. Just as it has been in prior years, those in attendance can expect an intense musical and sensory departure from the constructs of sanity and polite society.

To add excitement to everyone’s natural case of pre festival jitters, Richards has hinted at a few surprises lined up for the weekend.

“We’re adding more to the production [this year],” he says careful to not give too much away. “We have something new on the inside stage and a lot of new performers. We also have a few collaborations lined up to really freak people out.”

With plenty of experience organizing shows of this type and scale, Richards is confident that this weekend’s festival will run as smoothly as ever.

“I have had everything thrown at me that you can imagine over the last four years,” he admits while casually reminiscing about chaotic moments afforded by shows in prior years. “This is the fourth Haunted Mansion. They keep getting better because every year you figure out something new.”

Although Richards can assert that this year’s show will run smoother than the rest, he still looks back to the first Haunted Mansion as a seminal point in his career, as well as a defining moment in the world of electro-music.

“The first year [of Haunted Mansion] was amazing due to the fact that we had Deadmau5, Justice and DJ AM, who at the time were not that big yet.”

Richards can confidently say that the shows just keep getting better, but he admits there was something special about that first year. Between the thrill of watching rising talent and an emerging scene, that first HARD Haunted Mansion was the culmination of a project he had first began roughly 15 years before.

“I used to do these events back in the day, in ’90, ’91 and ’92. I threw underground warehouse parties in my 20s,” says Richards. From these early warehouse parties came the monikers ‘Haunted Mansion’ and ‘Electric Daisy Carnival,’ two events that Richards, at the time, didn’t believe had any staying power. However, after a short delve into the record business, Richards began to re think his logic.

“In 2007,” he says, “I realized that people weren’t buying records, so I went back to my roots and started producing HARD.”

Since then, the franchise has taken off and with several events to plan for all around the year, Richards has been busier than ever preparing techno-friendly venues for the masses to bang their heads.

With all his focus on producing the most enormous event possible, he admits that it is easy to lose track of the fact that he is also playing a set at this year’s HARD Haunted Mansion. He recalls from prior years that the task of throwing in a set on the same night you are producing a festival is indeed a taxing experience.

“Last year I was supposed to go on in 10 minutes, and police were waiting outside. There were some issues with the crowd backing in the street so I helped solve the problem, ran back and threw on my costume and hit the stage,” he shares.

Preparations and anxieties aside, the pieces are in place for this year’s HARD Haunted Mansion and those with tickets are no doubt getting goose bumps for the sonically charged fun fest that is headed their way. For anyone still on the fence about whether or not Haunted Mansion may be worth the commitment, Richards reminds you that, “If you want to come see the best electronic music from around the world assembled in one room for Halloween, come out to HARD. We’re not just bringing artists that might be OK; we are literally bringing the best DJs in the world.”