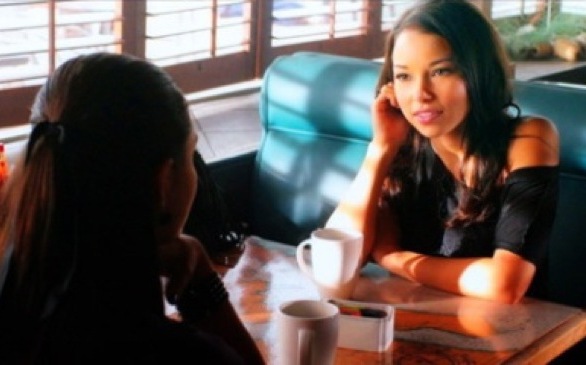 She walks into the restaurant with her best friend. She has a calm, breezy air about her that balances the edgy energy of her friend. As the minutes tick away we find that her best friend is more than edgy … she might be teetering on the edge of crazy. But not to fear, Melissa Glaser publicly stops Faye Chamberlain from creeping out Cassie Blake too much and privately tries to halt Faye’s progress in trying to hurt Cassie.

At first, Parker Kennedy is a hard girl to reach, and that’s easy to understand because she works 17-hour days. But finally we both find time to talk. When I pick up the phone, I hear a cheerful voice on the other end identify herself as Jessica Kennedy Parker. She’s calling all the way from Vancouver, Canada, where she has a small break from filming on the set of “The Secret Circle.”

I first ask her non cookie-cutter questions such as: “Jessica, do you feel that your diverse background helped to open more doors that would have been closed if you identified yourself as one race?” I give Jessica plenty of credit for tackling the questions with guts, humor and a realistic approach.

“I’ve never experienced or read something yet that said, ‘I can’t do that because I’m part black.’ Not to say that it won’t happen but it hasn’t affected my career. A lot of breakdowns I see are open ethnicity. It’s not that I have more opportunity, but I have equal opportunity.”

She also talked about past roles that led to “The Secret Circle.” Apparently she was on an all-black show in Canada called “Souls.” She also had a supporting role on J.J. Abrams short-lived NBC show “Undercovers” as the younger sister of the female lead. Unfortunately she was told after the first pilot that she was going to be replaced.

This is where some actors or actresses might throw in the towel but not Parker Kennedy.

She explains, “It was a learning experience because it taught me that in this industry … keep level headed expectations so that when things do happen you’re prepared. I grieved for three days and then said, ‘OK, moving along.’ A lot of times when you’re recast, it has nothing to do with your ability as an actor. On a positive side, I still got to work with J.J. Abrams on a pilot so the experience was worth what happened at the end.”

She also gave me some fun information about “The Secret Circle” cast: “Thomas Dekker is one of the most entertaining and unique people I have ever met. You’ll be rolling on the floor with laughter because of him.”

Parker Kennedy also mentions that the entire cast gets along well and there’s no drama. They are silly but focused and professional on the set. When they’re not on set, they get together to watch the show.

What else is going on with the young actress? A lot of exciting career turns. She is in 50/50 with Joseph Gordon-Levitt and Seth Rogen and also has a role in In Time starring Justin Timberlake and Amanda Seyfried.

Parker Kennedy is more than just a pretty face. There’s maturity and depth matched with humbleness that’s a breath fresh air. She’s had her fair share of career ups and downs, but what has helped her current success is the attitude to ‘move on.’ She sure does have equal opportunity, and she’s casting a spell by turning every opportunity into a positive experience.

“The Secret Circle” airs Thursdays at 9 p.m. on the CW.

TV Time
Want to become a Lego Master? Ask the experts: It won’t be easy
46 views

TV Time
Regina King has been on the road to ‘Watchmen’ for 25 years. She has no regrets
587 views

TV Time
‘The Marvelous Mrs. Maisel’ characters must ‘figure out how and where to land,’ Tony Shalhoub says
376 views