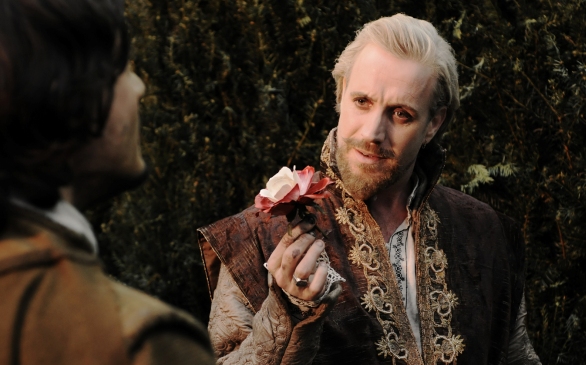 Ryhs Ifans stars as the Earl of Oxford in Anonymous.
(Credit: Reiner Bajo)

Was Shakespeare a fraud? That is the question posed in the new film Anonymous, a question that rocked me to the very core and challenged everything learned in literature and humanities classes.

Director Roland Emmerich provides a detailed look into one of the most controversial arguments in history: Was poet laureate and playwright William Shakespeare a fraud and just a front for a much bigger storyline and conspiracy? In Anonymous, Emmerich does an incredible job painting a picture that Shakespeare was indeed a fake. Although it doesn’t completely put to rest the Shakespeare argument, it provides a visual storyline into who wrote the legendary plays and poems.

Set in the political snake-pit of Elizabethan England, Anonymous speculates on an issue that has for centuries befuddled and puzzled minds such as Mark Twain, Charles Dickens and Sigmund Freud. Experts have debated, books have been written and scholars have devoted their lives to protecting or debunking theories surrounding the authorship of the most renowned works in English literature.

The England of William Shakespeare, filled with scandalous political intrigue, illicit romances in the Royal court and schemes of greedy nobles lusting for power was being brought to light in the most unlikely of places: the London stage. John Orloff's script is heavy in intriguing and edgy plotlines.

Ben Jonson (Sebastian Armesto) is in a coterie of struggling writers who, at the theater, encounter an amazing play seeming to have no author. It is a riotous success; so much so that the police arrive and close it for being seditious. More plays follow, and no one except Jonson seems to notice the attention paid to these stagings by the suave, aloof Earl of Oxford – played magnificently by Rhys Ifans, who shines as the true author of the works.

Emmerich’s film plays its hand early by having Oxford summon Jonson to his estate, offering him money to be a front for the plays. Jonson rejects the idea of being a puppet, and an actor/drunken buffoon named William Shakespeare (Rafe Spall) appears. The earl is appalled, but Shakespeare it is, and Oxford continues to launder his material through this semi-literate idiot.

The politics of the late 17th century come heavily into play, most of it retrofitted to match the theory. Edward Hogg, as the queen’s advisor Robert Cecil, is a standout as the Earl of Oxford’s nemesis, and Vanessa Redgrave makes an awards-worthy Queen Elizabeth.

Beneath the CG and bombast, there is a very inspirational theme. Emmerich vividly depicts Elizabethan audiences and their visceral appreciation of the plays put before them. The director provides a beautiful, romantic story of art and literature and the inspiring yet controversial role they play in daily lives.