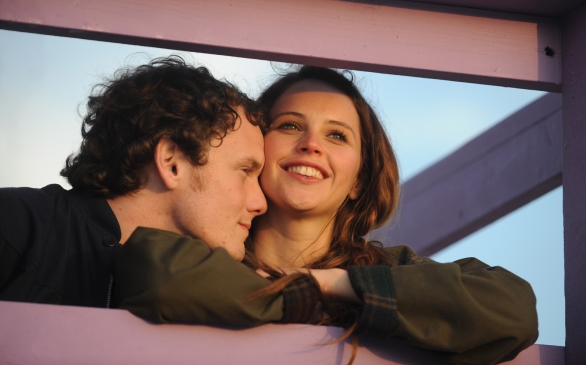 I sat down to watch Like Crazy with anticipation, not knowing too much about the film. I knew that it recently won the Grand Jury Prize at the Sundance Film Festival, which could only be a good thing. I was blown away by the simple and sweet storytelling of a love affair. No big crescendos or gratuitous sex scenes, but enough of a captivating story to keep you completely engaged.

Director Drake Doremus tells the story of Jacob and Anna, played by Anton Yelchin (Fright Night, Star Trek) and Felicity Jones (The Tempest), who fall in love their senior year of college. Anna must return to her native London after her visa expires but decides to overstay, not wanting the relationship to end. When she returns for a family visit, she cannot re-enter the United States. The movie then follows effortlessly as if watching a docudrama. It shows the ebb and flow of their relationship and the stumbling blocks they ultimately face.

We, the audience, continue to watch the on-again, off-again love affair that follows them over the years. They have passionate reunions and then begin new relationships as they try to move on, only to realize that something continues to pull them together. The story never gets boring, and you root for them but then see the other side and want them to move on and wish each other well. They can never fully invest in a new relationship as they yearn for each other.

The acting is at its best, and the way that they interact with each other is as if we are flies on the wall being let into their secret world. You never have the feeling of anything being contrived for an audience effect.

I know that this sounds like a very female-oriented film, but anyone who has been in love and had to face obstacles to keep that love intact can relate to the story. You see the budding of a new and innocent relationship and then, throughout time, the wear and tear that it can have on a person.

Like Crazy is a fitting title for an inspiring and moving film that draws you in from the start.