The Player with Robert Dowling Q & A: Sept. 20 @ ArcLight Hollywood 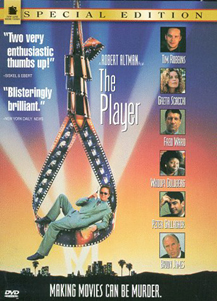 Untitled Document Making movies can be murder" – or so reads the tagline on the poster for Robert Altman’s 1992 film The Player, which stars Tim Robbins as a relentless studio exec who finds himself a suspect in the middle of a bizarre murder mystery. The film is a biting satire that rips apart almost every single sector of the entertainment industry, and really gets underway when an anonymous screenwriter who has been sending threatening notes to Griffin Mill (Robbins) eventually winds up dead in a deserted alley behind a movie theater. Griffin becomes a prime target, is haunted by the events at hand and, at the same time, is investigated by an extremely odd-couple police team (only a director with dark comedy sensibilities like Altman would pair Whoopi Goldberg with Lyle Lovett). Altman’s film is great for a number of reasons, especially because it showcases Robbins’ many talents and is crammed with lots of inside jokes about Hollywood politics.

To celebrate the 75th anniversary of The Hollywood Reporter, the ArcLight will screen The Player on Tuesday evening, Sept. 20, at 7:30 p.m. The film will be followed by a special discussion with Dowling, the editor-in-chief and publisher of The Hollywood Reporter, who will use The Player as a springboard to talk about the state of the entertainment industry. There will also be surprise special guests.

For more information or to purchase tickets, visit www.arclightcinemas.com.