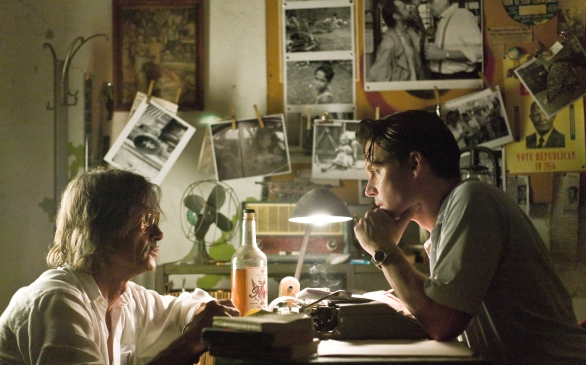 Director Bruce Robinson and Johnny Depp on the set of The Rum Diary
(Credit: Peter Mountain)

Following several years of whispered rumors and steady anticipation, the on screen adaptation of the early Hunter S. Thompson novel, The Rum Diary is set to hit theaters. Set in the sweltering heat of Puerto Rico in the late 1950s, The Rum Diary is the story of journalist Paul Kemp, an up-and-coming writer transplanted from New York to write for San Juan’s failing paper, The Star. Written at around age 20, The Rum Diary is one of Thompson’s first books and is often regarded as a seminal work for the author.

Although the book was written around 1960, it was not published until 1998 - an accomplishment that Depp is partly responsible for.

“Hunter and I were sitting in what he called his War Room, back in about 1997 … I happened upon a cardboard box that unearthed The Rum Diary,” Depp shares at a press conference for the film.

Depp explains that he encouraged Thompson to publish the book, and then went on to quote the writer’s reaction: “Yes, I will [publish the book]. However, I think we should produce this, man.”

Despite the initial excitement he held for the idea of this cinematic project, Thompson would not live to see the day the The Rum Diary was released.

In many ways, the film does not quite do justice to the book. With minor plot alterations and the morphing of certain characters, viewers who have read the book are left with a sense that they are missing something. Director Bruce Robinson elaborates on this issue, “The way I approached the adaptation of The Rum Diary was to absorb what the book was, and then rewrite it. There are only three lines that Hunter wrote in the whole script. I wasn’t trying to copy him.”

Depp explains that the film’s alterations from the book were something that the author actually wanted in the first place. “Bruce definitely went off the page in terms of the book,” he says. “But Hunter wanted to, he always wanted to.”

Depp goes on to recall that Thompson had noticed several imperfections with the book. It was, after all, his first crack at writing a novel. As such, Depp and Robinson were allowed full permission to streamline the story to make it suitable for cinema.

Depp takes on the lead role of Kemp, playing upon his firsthand knowledge of Thompson to create a multi-layered protagonist. A far cry from the freak power, gonzo legend that we know from Fear and Loathing in Las Vegas, the character of Kemp is refined, handsome and socially adept. It is a younger version of the acclaimed writer, whom Depp describes as “this kid who was teetering on the verge of finding his voice.”

Just as Thompson was struggling to find his voice through this first manuscript, Kemp struggles to find his voice within the context of the film. Packed with behavioral tidbits taken from Thompson himself, Depp’s performance walks a fine line of fact or fiction as he looks to pay tribute to the late journalist and his old friend.

A booze soaked journey of greed and contempt veiled with drunken mishaps and tinges of psychedelic inspiration, The Rum Diary is a dark adventure through the warm auspices of a Caribbean paradise. Much anticipated by fans of Fear and Loathing in Las Vegas, many will find that film is very much its own thing. Kemp is a very different beast from Raoul Duke, and the ways in which these characters compliment each other is fascinating to observe.

Depp is complemented by Michael Rispoli as Sala and Giovanni Ribisi as Moberg. Together, these two instigators serve to spin the momentum of the movie as well as demonstrate elements of Thompson that were not communicated through the character of Kemp. Ribisi’s adaptation of Moberg stands out as particularly noticeable as he offers a character that is both deeply intelligent and delightfully repulsive. As a strong antagonist, Aaron Eckhart plays the role of Sanderson, using all the command of a seasoned veteran to create a personality that is both powerful and detestable.

Were it not for the rich backstory afforded by the life of Thompson and the curiosity of Depp, The Rum Diary, as a movie alone, might seem a bit underwhelming. A winding plotline with a fairly weak climax, the film leaves viewers a bit unsatisfied, as if it fell short of its cathartic potential. However, as a tribute to the life of the world’s first gonzo journalist, this adaptation serves to do justice to the writer as Depp and Robinson recall the memories of their old friend.

“Hunter was with us every day [on set],” Depp says. “If [Hunter] had seen the finished film, he’d be whooping.”