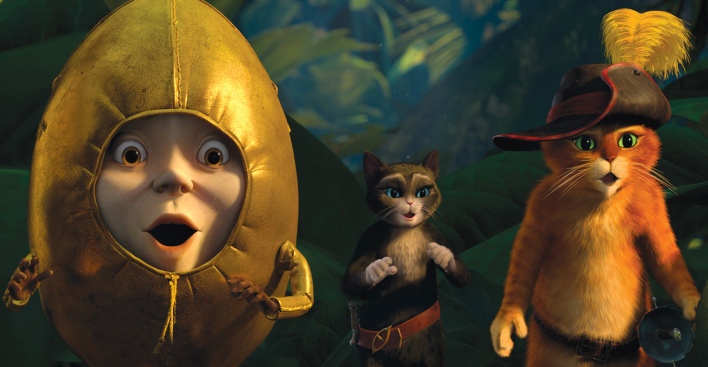 This story takes place long before he met Shrek, and but he’s the same notorious adventurer as ever.

Puss in Boots is set to release all over the country and features the incomparable voices of Antonio Banderas, Salma Hayek, Zach Galifianakis, Billy Bob Thornton and Amy Sedaris.

Banderas once again interprets the joyful voice of Puss, known for his role in the Shrek films. This 3-D animated adventure/comedy deals with Puss’ life before he encountered Shrek, and Puss was a bad kitty. Pretty much an orphan, Puss becomes best friends with Humpty Dumpty, voiced by Galifianakis. They have fun together, but they also get involved in troubling scenarios.

The movie is a witty adventure, at times both witty and daring. It is by far one of the greatest animated movies of the year.

The character of Puss in Boots is derived from the French tale, according to director Chris Miller. The French story is about a cat that often uses trickery, but it is different from this tale, in that Puss eventually becomes a symbol for good.

In this film, Puss teams up with Humpty Dumpty and the sexy Kitty Softpaws (voiced by Hayek). They take off on a quest to steal some magic beans from Jack and Jill (Thornton and Sedaris).

“She is so proud of me,” Hayek says of her daughter, who now knows she voices Kitty.

After a few laughs, Galifianakis joins the conversation. “I don’t have any children,” he says. “They left me.”

Eventually, the trio steals the famed goose that lays golden eggs. But trouble follows them to town. The gigantic mother goose is upset about her missing her little one and briefly terrorizes the town. After a series of unfortunate events, including Humpty Dumpty apparently dying when falling off a tall bridge, the mother goose finally reunites with her little one, they fly away and Puss is a hero. The town loves him, his adoptive mother adores him, but the law still wants him in jail.

You see, when growing up together, Humpty Dumpty and Puss both wanted to become rich, even if meant that they would steal and use tricks to get what they wanted. One day, Puss saved the life of an old lady. The town and law loved it, so Puss decided to stop committing crimes. At this point, his mother presented him with the musketeer-looking hat, shoes and sword. What a great combination.

One key thing to keep in mind about this movie is that Mexican legend Guillermo del Toro was an executive producer. This means that the movie is a must-see for its uniqueness and promise to fulfill and satisfy viewers. A lot of credit to this film can be directed to Miller, who guided everyone through the process of voicing the characters.

“The technique is basically to work individually,” Banderas comments. “In this case [though], I asked our director Chris to give us the opportunity to work together.”

And the result is a thoroughly entertaining comedic adventure.