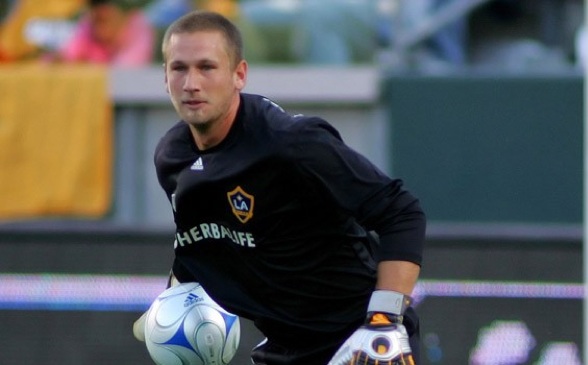 The Galaxy's Josh Saunders made his first start in goal.
(Credit: lagalaxy.com)
The L.A. Galaxy began their postseason quest on the right track, with a 1-0 victory over the New York Red Bulls on the road on Sunday afternoon. It was the Galaxy’s first-ever road win over New York in the playoffs.

“It was a great performance, one of our absolutely better games by far, for a couple of months,” New York head coach Hans Backe states during the press conference afterward. “We totally controlled the game, dictated the game. We had four huge chances to tie the game. To me, this is totally wide open. If we can perform like this on Thursday, we have won before in L.A. and we can do it again.”

With the win that came with over 22,000 fans in attendance, the Galaxy are just a tie away from clinching a semifinal berth, which would be played at home. Meanwhile, the Red Bulls face a must win situation later this week to advance.

“It was great to get three points, but I don’t think we were too happy with the way we played,” forward Mike Magee says. “I don’t think we played the way we’ve been playing all year. We took our foot off the gas, and we stopped passing. We didn’t put away that second one, which would have been huge. Even though we won, it’s a weird feeling because we didn’t play the way we’re used to.”

Magee was actually the player who scored and eventually gave the Galaxy a heads up. In the 15th minute, English midfielder David Beckham found himself doing what he did best throughout the regular season: serving balls for his teammates to score.

“He is intelligent, technically good and just has a real good feel for the game. He is a real good player. I would have to say the majority of his career has been as a forward,” Galaxy head coach Bruce Arena tells the media of Magee. “He has always been a player that I felt was very good in the penalty area. As he has matured as a person physically and tactically with the game, he has been able to accept a variety of roles. He has played now, first a goalkeeper this year, a defender, midfielder and forward. He is a very versatile and smart player.”

Magee fired and penetrated the back of the net on a left-footed shot past New York goalkeeper Frank Rost to make the score 1-0.

“I know the ball got laid to David, and he played a brilliant ball through that. Robbie did well not to continue his run because I think he was off,” Magee says. “The ball was a perfect weight, and I just had to put it on goal.”

That was Magee’s third playoff career goal, and the assist was Beckham’s fourth during the postseason.

Prior to the score, Irish forward Robbie Keane, who made his MLS playoff debut, almost scored in the 11th minute. Los Angeles goalkeeper Josh Saunders made his first-ever start in goal during a playoff game, making five saves for the squad. As a team, the Red Bulls outshot the Galaxy 17-9 and also led in shots on goal with a 5-3 edge.

Near the end of the game, both Brazilian Juninho and Mexican Rafael Márquez were ejected for misconduct. They will not see action in the next match, as they will serve a one game suspension.

Both the Galaxy and Red Bulls square off in leg two of the two-match series on Thursday, Nov. 3, at the Home Depot Center in Carson. The game is scheduled for 8 p.m. and will be shown live on ESPN2.

“It’s another tough game,” Beckham says of Thursday’s affair. “This fight is far from over. They’re a good team, they’ve got good players and they’re going to create a lot of chances. It’s up to us to defend well and obviously attack well. It’s far from over.”

Arena knows it will be a difficult game.

“Well, the game on Thursday is going to be a hard game. When you go on the road, you want to be in this position; to go home with three points,” he says. “It’s a good position to be in, but this series is far from over. I would rather be the team going home with the three points. It’s a great position to be in, but I still think the game will be difficult on Thursday.”