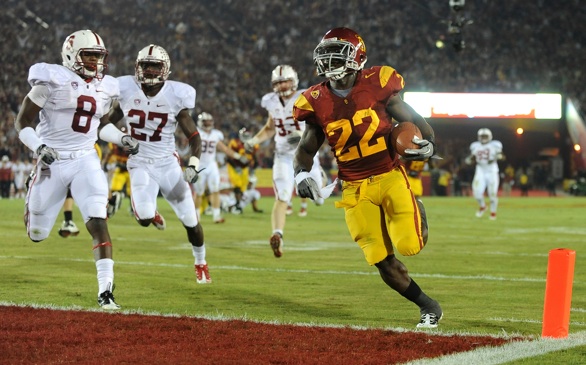 Southern California running back Curtis McNeal (22) scores on a 25-yard run against Stanford.
(Credit: Wally Skalij/Los Angeles Times/MCT)
Both USC and UCLA saw college football action over the weekend, but only one came out victorious.

The No. 20 ranked University of Southern California Trojans had it all up until the last moment, but a fumble ruined their chances to overtake the visiting No. 4 ranked Stanford Cardinal at the L.A. Coliseum on Saturday. USC’s 56-48 triple-overtime loss came in a thrilling fashion, but Stanford (8-0 overall, 6-0 Pac-12) was simply too much for the Trojans (6-2 overall, 3-2 Pac-12).

At 8:56 in the first quarter, Stanford produced its first score. Heisman Trophy candidate Andrew Luck connected with Tyler Gaffney for a 10-yard touchdown that gave the Cardinal a 7-0 lead.

Luck finished with 330 yards on 29-of-40 completed passes and three touchdowns. He was sacked twice and threw one interception.

“I might need a couple minutes to digest it, but it’s definitely up there,” Luck tells the media after being asked where the game ranked for him amongst others. “More than anything, I’m just happy to get a win.”

Kicker Andre Heidari, who finished the game two-for-two in field goals (including a 50-yard bomb before halftime), kicked the Trojans onto the scoreboard for three points with 14 seconds left in the first quarter. Stanford led 7-3.

After several scoring drives from both squads, the game finally landed in overtime. After the first two periods, it was bound to be determined in the third OT since both teams were mandated into going for the two-point conversion if scoring a TD.

Stanford capitalized first with their touchdown, which followed with the two-point conversion. USC tried to equalize the score, but failed to do so when running back Curtis McNeal fumbled the ball on a carry.

“No excuse, I just fumbled,” McNeal says. “I feel like beating myself up, but I’ve just got to keep pushing. I’m going to face worse things in life. I just have to keep my head up.”

For the game, Barkley finished with 284 passing yards on 28-of-45 completions. He had three passing TDs and an interception. McNeal, arguably the player of the game for USC despite the fumble, rushed for 145 yards on 20 carries with two touchdowns that included a 61-yard ecstatic scoring run.

The USC receivers saw solid productivity, especially in the hands of Marqise Lee, Robert Woods and Randall Telfer. Lee finished with seven catches for 94 yards and a touchdown, while Woods grabbed nine receptions for 89 yards and a TD. Telfer had five grabs for 45 yards and one score.

Trojan head coach Lane Kiffin was not very pleased with the officials of the game but went on to show that USC/Stanford games are now a rivalry.

“It’s a great rivalry,” he says. “We’ve had two great games with them that we haven’t been able to finish off.”

The Bruins (4-4 overall, 3-2 Pac-12) captured an important win over the visiting California Bears by a score of 31-14 at the Rose Bowl in Pasadena on Saturday.

Isi Sofele gave Cal a 7-0 lead with a rushing touchdown in the first quarter, but the Bruins never looked back after that. Johnathan Franklin tied the game with an 11-yard TD at 6:37 in the second quarter. After that, Derrick Coleman took over; he scored three touchdowns.

Coleman had 16 rushes for 80 yards, while quarterback Kevin Prince rushed the ball 19 times for 163 yards, but no scores.

Prince was not afraid to run the ball. His coach gave him the freedom to do so.

“If it's one-on-one, I'll lower the shoulder,” Prince says. “If it’s a couple more guys, I try to get down and slide. But coach Neuheisel talked to me about that on Tuesday; running against Arizona last week, I was a little more cautious. [He] told me not to worry about that and just to run as hard as I can.”