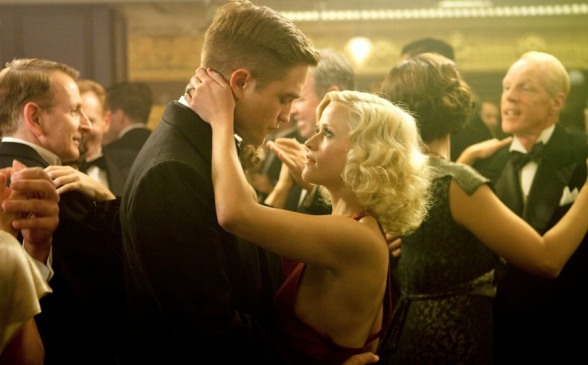 Robert Pattinson and Reese Witherspoon in Water for Elephants

Using the infamous McDonald’s coffee lawsuit as a jumping off point, Hot Coffee is a devastating look at corporate spin’s role in the perennial call for tort reform. See this now.

Master documentarian Errol Morris’ latest, Tabloid, profiles a former beauty queen who became a tabloid sensation after kidnapping the object of her obsession, a Mormon missionary whom she tried to “deprogram” with sex.

The Art of Filmmaking contains five fantastic documentaries: Tales From the Script, Directors: Life Behind the Camera, Capturing Reality: The Art of Documentary, Light Keeps Me Company and Lavender Limelight: Lesbians in Film featuring such luminaries as William Goldman, Robert Altman, Ingmar Bergman and dozens of others offering up wisdom on their craft.

A young veterinary student joins the circus and begins a love affair with the boss’s wife in the adaptation of the mega-best-seller Water For Elephants. Robert Pattinson, Reese Witherspoon and Christoph Waltz star.

Currently enjoying a late-career renaissance, Irish actor Liam Neeson has built an impressive body of work over the years. Nine of his films are now available in The Liam Neeson Collection, including Kingdom of Heaven, Taken, Rob Roy and Kinsey.

Three little-seen comic gems are now available online through the Warner Archives: Kim Novak stars as a young actress being molded into the identity of a dead screen icon by her obsessed director (Peter Finch) in The Legend of Lylah Clare, a bizarre, scathing look at Hollywood from Robert Aldrich.

Stacey Keach stars as a man with a portable electric chair in The Traveling Executioner, co-starring Bud Cort.

One of director George Cukor’s final films, Travels With My Aunt stars Maggie Smith as an eccentric who enlists her stuffy nephew in a madcap adventure. Graham Greene wrote the source novel.

Lon Chaney, “The Man of a Thousand Faces,” stars in the landmark silent film The Phantom of the Opera, now available remastered for a definitive Blu-ray release containing three versions of the film.

Destined to join the ranks of favorite antidotes to holiday cheer, Finland’s Rare Exports: A Christmas Tale revisits the Santa Claus legend with blackly comic action. When an excavation digs up the evil Santa Claus, it incites the wrath of his elves. The Blu-ray also contains the 1964 cult classic Santa Claus Conquers the Martians.

An ’80s cartoon favorite gets a reboot with Thundercats: Season 1, Book 1. Young prince Lion-O must lead his band of surviving feline heroes on a quest for the Book of Omens to defeat the evil Mumm-Ra.

Britain’s expletive-spewing chef Gordon Ramsay sets out to crown England’s best local restaurant, pitting the best of the best against one another in The F Word: Series 5.

“Doctor Who” is better than ever with Series 6. Fresh off his BAFTA nomination, Matt Smith returns as the Doctor, a time traveling alien out to save the universe with his companions. Neil Gaiman scripts an episode.

The great Idris Elba (“The Wire”) returns in “Luther 2,” the follow-up to the Emmy-nominated miniseries. The brilliant but tortured detective takes on a prostitution ring and a serial killer while battling his own demons.