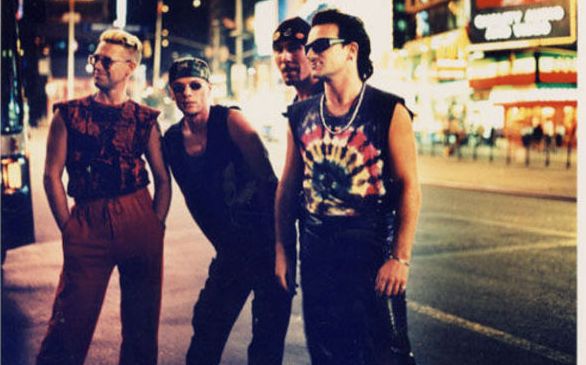 You’re probably familiar with the first two discs of this six-CD collection; they hold the original recordings of Achtung Baby and its slightly less-successful 1993 companion release, Zooropa.

If you’re just a fan of U2’s hit singles like the included “One,” “Even Better Than the Real Thing” and “Mysterious Ways” you don’t need to go much farther.

Fanatics will have a real field day exploring the other 50 tracks from the era that are appended here including such goodies as a six-minute dance mix of “Lady With the Spinning Head” and a batch of unexpected cover tunes like versions of Lou Reed’s “Satellite of Love” and the Stones’ “Paint it Black” and even an interpretation of Creedence Clearwater Revival’s “Fortunate Son.” Other B-sides found here include the spooky, Latin-mass derived “Alex Descends Into Hell For a Bottle of Milk/Korova 1” and a surprisingly soulful take on William Bell’s classic “Everybody Loves a Winner.”

The set does get a bit indulgent with some titles; versions of “Mysterious Ways” and “Even Better Than the Real Thing” for example account for nearly a quarter of the included material.

But there’s enough variety to the mixes that each version warrants inclusion, and all the other rarities compiled here make this anniversary edition well worth popping for.