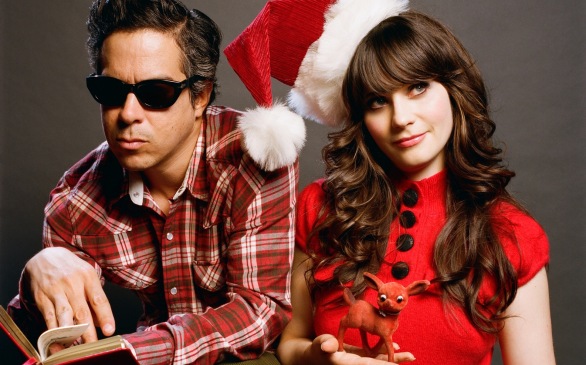 Have a Very She & Him Christmas.

It’s the time when leftover Halloween decorations, costumes and candy are on discount at stores everywhere and Christmas sales are popping up left and right. Halloween has come and gone which, in the world of business and commercialism, means that the focus is now on the next major holiday: Christmas. It might seem extraordinarily soon, but there are already a few Christmas albums out there from major music stars.

Ranging from intriguing to surprising, these releases are sure to make some unique background music for your next Christmas party – if you choose to have it anytime between now and December. Just because it’s Christmas, doesn’t mean you can’t have music from some great artists. You can move past those old Christmas CDs and check out these modern takes.

Justin Bieber – Under the Mistletoe

Of course, the reigning king of tween and teen hearts virtually everywhere isn’t going to miss out on the Christmas music fun. Biebs has his own version of Christmas tunes with his album and even manages to craft a duet with the ever-talented Mariah Carey and, of course, his mentor, Usher. The Band Perry and Boyz II Men also make appearances, as if this were a little cozy Christmas Top 40 party.

If that doesn’t convince you to buy the album, Bieber obviously has more tricks up his sleeve, though in this case they end up being for a good cause. Proceeds from album sales will go to a variety of charities, including the Make-A-Wish Foundation – nothing like music with a cause.

OK, it’s hard to think of anyone else whom you would want crooning into your ear about Christmas. Buble’s first full-length Christmas album (Fans will remember that he released an EP called Let It Snow in 2007.) is aptly titled Christmas. Swoon over his smooth voice as he covers classics like “Jingle Bells” and “Silent Night,” and teams up with Shania Twain for a rendition of “White Christmas.”

You can even check out a trailer online if you want to get a taste of the album before you buy it. At any rate, it’s sure to capture the hearts of many a teenager, mom and perhaps everyone in between. Too bad the album doesn’t come with a Christmas bow-wearing Buble.

For the guys hoping for something a little less hunk-centric, cutesy indie duo Zooey Deschanel and M. Ward are teaming up for their own, unique take on a Christmas album. Covers include “Have Yourself a Merry Little Christmas” and “Baby It’s Cold Outside,” and Deschanel’s voice is sure to keep you warm and cozy no matter the temperature.

The album also includes some tracks that are only vocals and acoustic guitar, giving the classics a stripped-down, raw feeling. If your boo or BFF is a fan, you can buy them She & Him mittens or a beanie online, too. This Christmas just got a little more She & Him.

Scott Weiland – The Most Wonderful Time of the Year

Yes, you read correctly. This is a Christmas album from the lead singer of Stone Temple Pilots and Velvet Revolver. The same voice behind the sexually forward “Sex Type Thing” and the emotionally raw “Fall to Pieces.” The cover even features a smiling Weiland next to a Christmas ornament.

Though he won’t be backed up by Slash or any of the STP outfit, he will have the help of an orchestra to cover Christmas classics “with a little twist,” as he puts it. The 10 tracks of the album are delivered in a variety of genres from Latin to reggae. It might not be his usual sound, but the album has already gotten a few favorable reviews online.