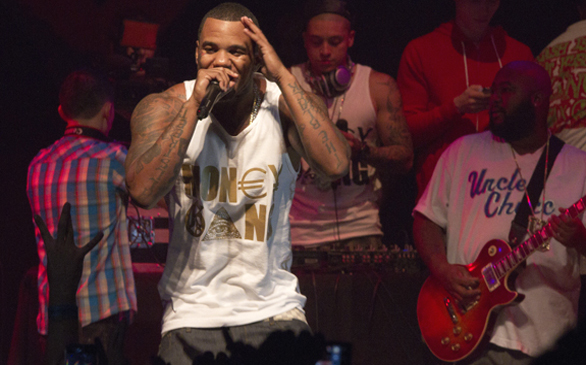 The Game gave a unique and sophisticated performance of his repertoire at the House of Blues in West Hollywood.

After several opening acts, including newcomer Don Trip, the Game hit the stage with no hesitation. He was ready to rap his lungs out. Perhaps it was the venue. Perhaps it was the Saturday night, the crowd or the lively venue, but this was an awesome show of hip hop and rap. It is by far one of the best I have ever attended.

With jeans, a white sleeveless shirt, a white Louis Vuitton belt and a black jacket, the Game walked into the scene in a humble manner and with no elements of shyness. The Game, who is a resident of Glendale but a native of Compton, performed a lot of tracks, which resulted in a near 45-minute show. From beginning to end, he displayed new material and classic hits from The Documentary, Doctor’s Advocate, LAX and The R.E.D. Album.

Near the end, he closed off with “How We Do.” The track features acclaimed rapper 50-Cent, but the Game performed it to perfection on his own with a lot of energy and enthusiasm.

At the age of 31, the Game has been active in the industry for nine years. He has also made appearances in movies, such as Waist Deep and Street Kings. Born Jayceon Terrell Taylor of African-American and Mexican-American descent, the Game has been controversial at times, but his talents behind the mic have kept him focused on the task at hand. His biggest musical influence will forever be Eazy-E. As a tribute to Notorious B.I.G., Eazy-E and Tupac, the Game sporadically asked his DJ to play certain tracks from those dead rappers. It was so much fun, for the crowd identified with all those tunes as much as the performer.