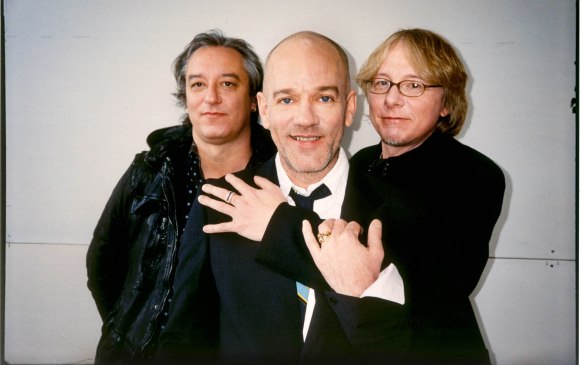 R.E.M. releases what will be their final album Nov. 15.

Leave it to R.E.M. to give their upcoming hits collection a tongue-in-cheek title. The 40-song retrospective is called R.E.M., Part Lies, Part Heart, Part Truth, Part Garbage, 1982-2011. The release comes barely 60 days after the band announced their dissolution and is supposed to be the final R.E.M. album.

Says the band’s Mike Mills, “Working through our music and memories from over three decades was a hell of a journey, but we realized that these songs seemed to draw a natural line under the last 31 years of our working together.”

The compilation collects material from all 15 R.E.M. studio albums and appends one new song, “We All Go Back to Where We Belong.” The set drops on Nov. 15.

Skinny Puppy Loves peta2, Not Much Else

Industrial music veterans Skinny Puppy have teamed-up with peta2, the youth division of PETA, to promote both animal rights and the band’s new album, Handover. Skinny Puppy fans can learn about how to get active for animals and grab a free download of new song “Wavy” with a visit to peta2.com. The mistreatment of animals is not the only thing Skinny Puppy is rallying against at the moment, witness a statement from band singer Nivek Ogre.

“It’s definitely the overarching feel of ‘bend over and take it’,” offers Ogre. “I recently listened to the record, and it’s making even more sense to me. We’re certainly experiencing the rape of mankind as the world’s economies slide even further and the inability of people to look around them and see what’s going on. You’re starting to see a neo-feudalistic empire on the rise. People are getting so pissed off they’re turning on each other.”

Maybe there’ll be some peace at least while people spin Handover, just released on the SPV/Synthetic Symphony label.

For years, Neil Young has been organizing concerts to benefit the Bridge School, a California organization that uses creative methods to educate children with severe speech and physical impairments. This year marks the 25th anniversary of the event, and to celebrate, Reprise Records is releasing a three-DVD set and a two-CD set that compile performances spanning the event’s entire history.

The DVD set includes takes on “At the Hop” by Devendra Banhart, “Blue Ridge Mountains” by Fleet Foxes and “Disposable Heroes” by Metallica along with contributions from big names like Paul McCartney, Pearl Jam, Bruce Springsteen, David Bowie and many others. Thom Yorke, Norah Jones, No Doubt, Sonic Youth, Dave Matthews and Band of Horses are some of the acts contributing to the CD set.

Seminal L.A. band X has released the schedule for its Xmas Rock N Roll Revival Tour. The band members will be touring with Pearl Jam in South and Central America for all of November, but then they’re back in the States to begin their own headlining tour that includes a Dec. 16 stop at the Music Box.

Earlier this year, X embarked on a brief tour where they played their legendary Los Angeles album in its entirety; you can expect to hear music from that album on the Xmas tour, but the album will not be played all the way through. The Black Tibetans and Sean Wheeler and Zander Schloss will also appear at the Music Box show.

Reggae stalwart Jimmy Cliff is about to release a new EP called The Sacred Fire. The work represents Cliff’s first studio effort in seven years and is meant as a tide-me-over until his full-length hits next year. The only living musician ever to receive Jamaica’s Order of Merit, Cliff has sold more than 20 million albums over the course of a 50-year career.

The Sacred Fire drops next week, and Cliff will be part of the line-up for KCRW’s Are Friends Eclectic? Holiday Benefit Concert at the Orpheum Theatre on Dec. 2. Proceeds from that show will help to offset the station’s operating costs.