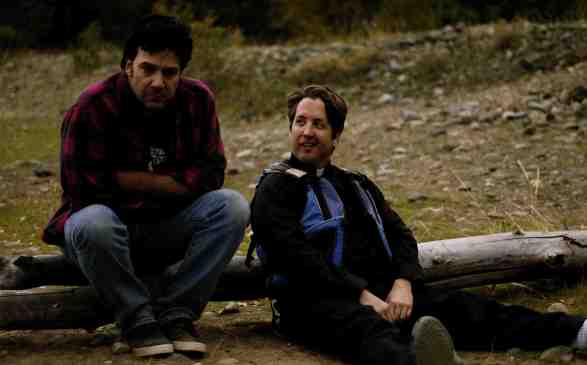 The film’s story starts off with a story. An old woman leaves a grocery store to find a group of young men rummaging through her car. She pulls a gun on them, and they leave without a struggle. As she gets into the car she realizes it isn’t hers.

And suddenly the narrator, a dopey priest (Steve Little) leading a Bible study, forgets all of the elements of good storytelling. He laughs in the middle of it and rambles on past the natural ending of the story. It’s supposed to be funny because it’s not funny, but somehow the blandness never makes that jump to humor. Basically, The Catechism Cataclysm lays down its narrative style early on.

Catechism stars Little as Father Billy, a man-child who somehow managed to become a man of the cloth. After being forced to take a sabbatical for all-around ineptitude, he decides to reconnect with his high school idol, his older sister’s rocker ex-boyfriend Robbie (Robert Longstreet). Robbie doesn’t remember Billy, but he hasn’t got anything better to do so the pair goes for a canoe ride.

That’s when things get weird – as in absurdly, randomly and supernaturally weird. And again, it seems like the random incidences that happen on their trip should be funny, maybe even laugh-out-loud funny. At best, some of the scenes warrant a chuckle.

For instance, when Billy thinks it’s a good idea to order fried food for breakfast, Robbie comments that they’ll probably have to use the restroom later. In the stall, they play a “real or fake” fart game. If you don’t like poop humor, you’ll be bored. If you do, you’ll wonder why they ruin the scene with Billy’s confession that he’s never been happy. Thankfully. it’s the film’s only attempt at being heartfelt or emotionally serious.

It might be that the film is suffering from a sort of identity crisis. On the one hand, it wants to be an arrested development buddy comedy in the vein of Judd Apatow films or The Hangover – as if sticking a guy in a priest outfit and telling him to yell a lot puts him on par with Zach Galifianakis’ Alan.

At the same time, it’s meant to be an absurdist indie film concerned with the art of storytelling. Here, there’s hope. There are some amusing, well placed literary references and some playful – and yes, funny – dialogue on the subject of how people evaluate endings. I was just glad it was over.