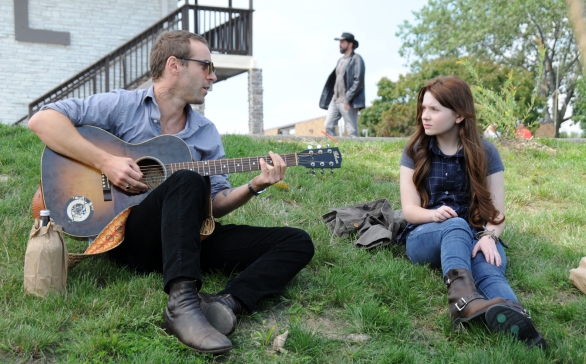 There must be confusion about what the world really looks like around us. Do people now, after having accessible ownership of digital motion picture cameras and a democratized means to exhibit their two-penny features, only see the exchange of intimate human interaction within the frame of arbitrary but pretty scenery that hasn’t much intrinsically to do with the direction of a film’s story? Has the filmic world devolved into a precious montage, an easy expression of something cute enough to garner followers on YouTube, but that is essentially a collection of images that have no meaningful relationship to one another?

If the new feature from indie director David M. Rosenthal, Janie Jones, is any measure of this phenomenon, the answer is yes. Ethan (Alessandro Nivola), the frontman of an indie rock band meets abruptly with a woman from his past, Mary Ann (Elisabeth Shue), who has shown up at his gig with more than smiling praise for his growing stardom. Janie Jones (Abigail Breslin) is his child, he finds out, conceived with Mary Ann, Janie’s meth addled mother, 13 years ago. Mary Ann’s addiction has pushed her into rehab and self-imposed exile from her daughter, and so, Ethan – on the road, up into the night with alcohol and a crew of partying band members – is forced to look after Janie, an ostensible stranger, albeit a precious one.

Precious is the name of the game in Janie Jones, a capably made picture with some nice looking shots, but ones that are disjointed from their own narrative. In one of the film’s most important scenes, Janie and Ethan sit on the lawn strumming their guitars (Janie is a burgeoning musician in her own right.), bonding intimately with their words and their music. The scene is revealed in a long shot with a building behind them, “MOTEL” it screams, a piece of American road-trip kitsch. And this is the takeaway of the scene, not a revelation of how Ethan and Janie appear to each other in the moment; it is not a textured description of their personalities and physical selves discovered in a shared gaze, but instead something simply, reductively, cute.

Breslin is the film’s saving grace, should there be one. Hers is an impeccable, natural performance that shows off her genuinely sweet disposition and apt ability in front of the camera. I look forward to more from her, next time in a feature where the technique doesn’t compete with her and wouldn’t think to overcompensate with its own ambitions to boast what’s precious.