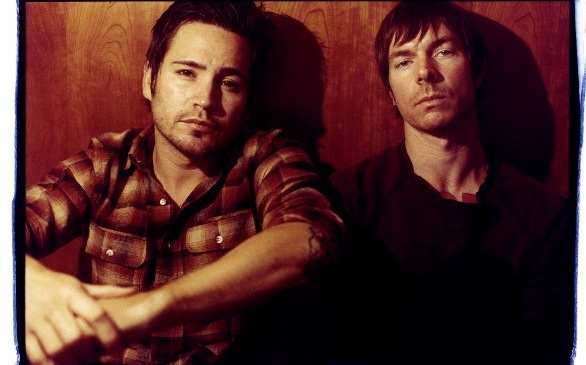 How do new sounds come about? What does it take to shape the sound of something that is only in you and your buddy’s head? Do you go to the studio and work tirelessly trying to come up with something, or do you just let it happen?

Take the band Middle Class Rut as a prime example on how to change the sound of music and do it organically. Two former members of the band Leisure make up this group; Sean Stockham and Zack Lopez were the guitarist and drummer in their previous band and went their separate ways after that project ended. Stockham went up north after his first son was born to focus on his family, and Lopez found his way into construction in Pasadena. The two stayed close and made time to still play music together.

“Then, finally, after we had all these songs we thought we should just try and throw some lyrics over them,” says Stockham, “We took our respective parts and went home and worked on it, then got together and recorded. When we heard it, we thought, ‘Wow, that’s kind of cool.’ I mean, it was just as good, if not better than anything we had with any of our other singers. So we decided to go with it.”

Only a couple contemporary bands with two members have successfully pulled this off: the Black Keys and White Stripes. But those two have a similar sound, while the grind and power behind Middle Class Rut speaks to something very different. Part of that comes from the guitar setup.

“Zack has a pretty crazy setup. The guitar splits off in three different directions. He has a bass amp running and then two separate guitar amps. He has a Marshall rack that was big in the ’90s that no one uses anymore, and we found a way to make it sound like it’s not supposed to. Then with the other and the bass amp running all the time, it gives you a sound and layers that you can’t get with just a normal rig,” Stockham explains about the band’s very unique sound.

But what about making sure that this sound comes off the same live? Lots of bands get stuck and have to supplement their stage show with additional musicians or gear to perform the same song that you hear on the record.

“We went with recording a lot simpler to make sure we could recreate the same sound live,” shares Stockham. “With a song like ‘New Low,’ the most popular song out right now, it’s a tough one to get live. Because we don’t play to a track and I don’t play to a click track or that shit so, we have to just adapt when we do it live and be comfortable with that sound.”

So when playing live, the dynamic also shifts because the focus has changed.

As Stockham puts it, “You can no longer hide behind a stupid singer that’s doing gymnastics and shit while you’re playing. It’s twice as much pressure with two people than it would be on four. It took time to get used to, but after doing this for three or four years now, it’s gone and we can do it.”

Working with less people has been better. Not only have they streamlined the band but their team as well. Working with a small label allows them to handle the focus of the band with more ease. They are doing most everything themselves, and it shows. When a band can have control over its sound and direction, it comes through tenfold in the performance and path. The music videos for these guys look amazing, and the feel of the album is honest and untouched by someone trying to change their raw sound.