The Jezabels: Poised to Take You Prisoner 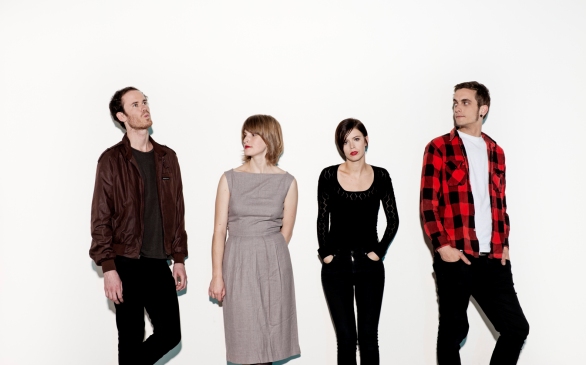 Gearing up for a tour in support of their debut album, Prisoner, the Jezabels are venturing back to Los Angeles to play for their growing population of fans. I briefly met the Jezabels earlier in the year at one of their L.A. shows, and they were a pleasure to see live. I jumped at the chance to interview keyboardist Heather Shannon before their upcoming show at the Echo. Their stop in Los Angeles is the first of their North American shows to come over the next couple months.

Currently home on a slight break from touring their home country of Australia, Shannon and I skyped with an 18-hour time difference to discuss the band’s upcoming tour and new album. After playing in Los Angeles earlier this year, Shannon is happy to be headed back.

“I like L.A., people either love the music or hate it. There is no in between,” she says.

Los Angeles is known as a tough-to-impress music crowd, but the Jezabels seem to be able to take it by storm.

Shannon continues, “Either way, there’s the weather. It reminds me of what it’s like here in Australia. It’s like home.”

Their 13-city North American tour will be taking them up the West Coast and ending in Montreal later this year. Hitting the road with Hey Rosetta! is one of many things about the tour that Shannon seems thrilled about. With Hey Rosetta! hailing from Canada and the Jezabels coming from Australia, it will be a fantastic international lineup and one not to be missed.

While the Jezabels have been making their way around for quite some time, their schedule has recently picked up even more. I asked about the tour experience and while she seems to like life on the road, Shannon admits to one challenge.

“I love the traveling on tour,” she says, then seeming to almost correct herself, she adds, “Learning to fall asleep while on the road has been the hardest part.”

Deciding to stick with their producer and friend Lachlan Mitchell from their previously released EPs, Shannon and the band decided it was a good match.

“He pushes us to be our best and also reins in the little disagreements,” she says.

The band, having worked together for years, has been able to make improvisation an important part of the writing and recording process. Shannon and lead vocalist Hayley Mary met in college and began playing together. It was simply the duo until they met and decided to work with fellow bandmates Sam Lockwood on guitar and Nik Kaloper on drums. Once the band was together, the writing and recording process became what it is today with improvisation in the studio and each member throwing their own input into the mix. During the writing process, it seems to be very organic for the band members, who are friends as much as bandmates.

Recently, the band has been consistently playing sold-out shows all over Australia, and I anticipate and hope for the same for their upcoming North American Tour. The performances, filled with drama and emotion, take over the audience and new fans are always made.

Recently signed to Mom & Pop Records, the band’s debut, Prisoner, will be released digitally on Nov. 8, and early in the new year the physical album will be available. Be sure to make it out to their upcoming shows. They never disappoint.

Shannon, while not overly excited about the world of Twitter, has grown to appreciate the instant feedback and fan relationships grown through Facebook. The band has been using their page to reach out and get feedback, so always feel free to check their Facebook page out for news and updates on the tour and album.

The Jezabels perform Nov. 8 at the Echo. For more information, visit thejezabels.com.