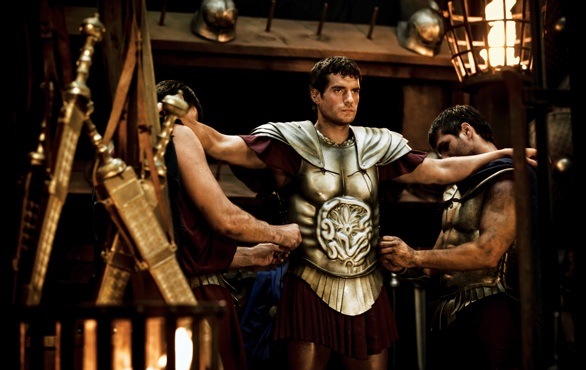 Hanging out at the Four Seasons in Beverly Hills, it was exciting to sit down with the cast of the upcoming sure-to-be blockbuster Immortals. The film tells the story of Theseus (Henry Cavill), a mortal man chosen by Zeus (Luke Evans) to lead the fight against the ruthless King Hyperion (Mickey Rourke), who is on a rampage across Greece to obtain a weapon of destruction that can destroy humanity.

Immortals is an action packed movie with a strong cast of Hollywood superstars, including Rourke and Stephen Dorff, and up-and-coming Hollywood stars including Freida Pinto (Slumdog Millionaire, Rise of the Planet of the Apes), Evans (2010’s Clash of the Titans), Isabel Lucas (Transformers: Revenge of the Fallen) and, of course, Cavill (“The Tudors”), who is also the next actor to don the legendary blue suit of Superman.

Cavill excitedly discusses the differences of training on Immortals, which was mostly body weight training, and The Man of Steel, where he’s bulking up to fill out the suit. He definitely has the look down pat, even sporting a stylish curl in his locks.

When asked how he handled playing two larger-than-life characters in Immortals and as Superman, Cavill replies, “The roles are just roles, [I just] do [my] best to put it on screen, and live it to the max.”

Though Cavill is the center of attention of the entire building, Rourke couldn’t help stealing some of the thunder – not only in the film but during the press junket as well. Rourke calls Immortals “a chance to see sheer great entertainment” with a superstar cast. He also talks about how he got into character using the adjustments of idealistic and fantastic guidance from director Tarsem Singh (The Fall, The Cell), “who put together the adjustments, and [then] he ran with it.” Rourke goes on to state that Singh was at the top of his list of new directors along with Robert Rodriguez (Sin City) and Darren Aronofsky (The Wrestler), with whom Rourke has had major success. He hopes that three time's a charm.

Rourke also mentions, “Singh’s attention to detail was uncanny and like no other.”

Singh replies to Rourke’s comment saying that he had spent numerous years in pre-production and that just the wardrobe for the film took nearly three years to complete – which is apparent in its grandeur.

Singh says that he had a great time with the cast and he couldn’t sit still as he was filled with excitement just talking about Immortals, mentioning he “had found everyone that fit their right part.”

When asked about his direction style, specifically about whether it was similar to his upcoming Snow White project, Mirror Mirror, Singh says no, because he doesn’t want people take away the fact that he didn’t want to just direct an action film that would define a time or a director. He wanted to direct a film that would, above anything else, get people to want to see it.

This is reiterated by producer Mark Canton who says, “This is a movie that will give people a reason to leave to the house, even with home entertainment competition – with video games such as ‘Call of Duty’ being released the same week.”

Canton emphasizes that competing against new forms of technology is hard, but “Immortals is one of the best reasons in long time for people to do so.”

Canton also wants to show that Immortals is a different project from his other hit, 300, “which, though similar, offers many different attributes being it was an completely original story with no real intellectual property.” Immortals is its own story that grew and grew. He feels that it is something audiences have never seen before.

The film offers a balance of heart with beautiful actresses Pinto and Lucas, who mention that though they felt a little strange about performing in the action-filled, testosterone-driven film, they provided balance to the storyline as well as the set.

The Immortals cast members seem like they had a fun time working together, which definitely shines through on screen and is sure to offer great fan enjoyment.