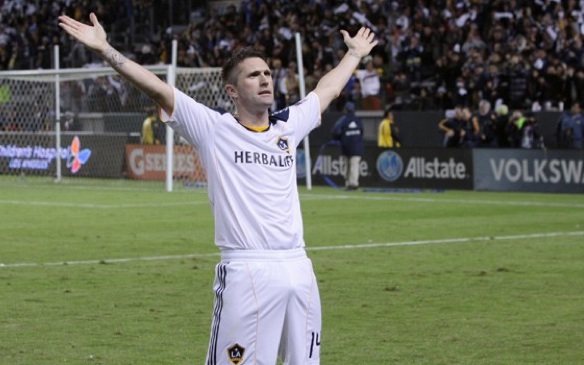 Robbie Keane was arguably the Galaxy's best player of the night.
(Credit: lagalaxy.com)
With a 3-1 win victory over visiting Real Salt Lake in the Conference Championship, the Los Angeles Galaxy moved on to the MLS Cup.

Playing at home in front of 23,437 fans and with cold weather, the team managed to play solidly to secure their appearance in this year’s championship and final game.

“I’m real proud of the effort the guys put in all week. It was a tough week. Our guys did a great job, and I thought we were excellent tonight,” team captain Landon Donovan states.

Los Angeles’ first score came from the penalty spot after defender Omar Gonzalez was brought down to the ground by a Real Salt Lake defender when attempting a header. The official immediately called the foul; Donovan netted the tally to give the Galaxy a 1-0 lead in the 23rd minute. However, the visitors would respond two minutes later as forward Alvaro Saborio tied the match and sent both squads to the locker rooms in a knotted affair.

Midfielder Mike Magee gave Los Angeles a 2-1 edge in the 58th minute after he scored off a header. Both David Beckham and Robbie Keane were credited with the assist.

“David got the ball, and whenever he gets it, I try and get in front of the goal and he pretty much just banked it off of me,” Magee says.

Keane, arguably the team’s best player of the night, finally secured a goal on a well-executed individual effort. Keane trapped the ball after a Donovan pass, dribbled inside the box, completely fooled a defender and then fired a right-footed shot into the back of the net for his first postseason score in the MLS.

“Two-one is never enough. So, it kind of came at a good time. The most important thing was getting the win and getting to the final,” Keane says of his goal.

Los Angeles advanced to the one-game semifinal Conference Championship after having beaten the New York Red Bulls over a two-match leg series. In the first game, the Galaxy won 1-0 in New York before coming home.

In the second leg, Los Angeles got off to a bad start when New York’s Luke Rodgers scored in the fourth minute on a right-footed shot that was placed low and past goalkeeper Josh Saunders. Thierry Henry and Joel Lindpere were credited with the assist.

“I think that we started off bad and it wasn’t what we had planned so obviously it was a disappointing start, but I think that the way that we adjusted ourselves showed the character of our players and our team,” Beckham says of that particular early bad start.

Magee, who scored the game winner in New York, knotted the score before halftime on a solid header. Off a Beckham corner from the left flank, Magee’s head connected with the leather for the score in the 42nd minute.

“Any time he has the ball, especially on corners, you just have to put yourself in a good spot because you know that he is going to put it there,” Magee says of Beckham when he scored against NY.

Donovan, who has been plagued with mild injuries, gave the team the 2-1 lead on a penalty kick. For the aggregate, the Galaxy took the series by a score of 3-1.

“Certainly a difficult game tonight. It was very physical, obviously, spotting – it’s not the right word, they earned it – falling behind a goal and the series literally being even three minutes in at our place,” Arena said at the time.

Los Angeles plays the Houston Dynamo in the MLS Cup on Sunday, Nov. 20, at the Home Depot Center in Carson at 6 p.m.

“Hopefully, we can get our group ready for the final. It’s not going to be easy,” Arena says. “Houston’s a very good team; they smacked us around pretty good a couple of weeks ago. We know we are going to have to be at our very best if we are going to beat them.”