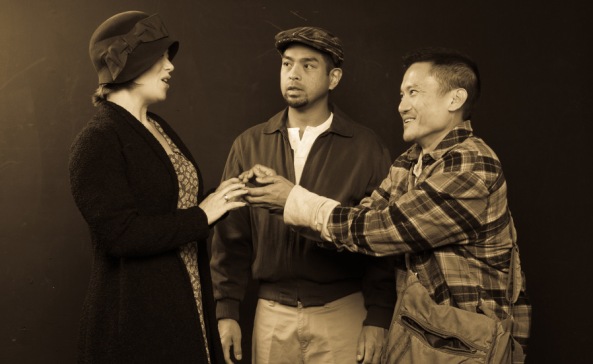 With pure honesty, I must admit and declare myself a true lover of “The Romance of Magno Rubio.” This play is an unforgettable tale of romance, love, survival and pursuit of the so-called American Dream. A production filled with articulate thrills, distinct laughs, and prolific musical segments that rhyme, “The Romance of Magno Rubio” is the must-see play of the season.

With high energy and a creative script, this play is based on Carlos Bulosan’s seminal short story about a love struck Filipino migrant worker in California during the 1930s. Meet Magno Rubio, who is a bit primitive but becomes educated as the story progresses. Magno Rubio is funny and oftentimes naïve. Thinking a Caucasian lady (Clarabelle) from Arkansas is in love with him, Magno Rubio drastically falls in love with the wrong woman. Clarabelle just asks for money and gifts, and in return, Magno Rubio receives illusions and lies.

The play also delivers original tunes in various ways – including Filipino love songs (“kundimans”) – along with some fine guitar playing and intense martial arts scenes. Simply amazing, to say the least! Dual casts perform the play in rep, one in English and the other in Tagalog, which the main language of the Philippines.

“The play traces the story of five different ‘Manongs’ (members of the first wave of immigrants who came from the Philippines to American in the 1920s and 30s),” executive producer Ted Benito says of the production.

“The Romance of Magno Rubio” is provocative, yet artistically fulfilling; this is mainly due to the great acting involved. Led by JonJon Briones (Magno Rubio) and Antoine Diel (Prudencio), Lonnie Carter’s OBIE award-winning play is fascinating and touching. It reaches the hearts of every single audience member.

“This is Filipino spoken word, rap, hip-hop. We’ll call it ‘Manila Rap,’” playwright Carter describes. You must experience it yourself!

[Inside] the Ford is located at 2580 Cahuenga Blvd. East, Los Angeles. For more information, visit fordtheatres.org.