Switchfoot: Challenges the American Dream with Nothing is Sound 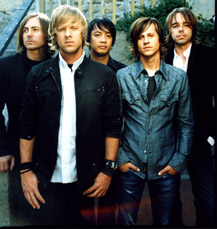 Though dark clouds of confusion and capitalism have formed over our generation, Switchfoot brings some rays to shine light on the situation with their latest album Nothing is Sound.

Since Switchfoot’s first emergence from their wholesome indie background to the world of rock stars and major music labels, the band continues to saturate fans everywhere with a message that gives a whole new meaning to the phrase "rock of the ages."

The rock ’n’ roller coaster of stardom hasn’t slowed down at all for the group since the release of its multi-platinum album The Beautiful Letdown, in 2003. Since then, the band has toured the States, Australia and Japan, contributed music to major movie soundtracks, made three music videos, and released three singles and a DVD. The band has also hosted the First Annual Switchfoot Bro-Am to benefit a non-profit organization serving the at-risk youth of San Diego, taken a trip to South Africa on a spiritual quest and finished recording their follow-up album. Not too shabby for a band that was signed just two years ago. Switchfoot also manages to stay grounded in spite of it all – a major accomplishment in itself.

"I think, in many ways, the last time out on the road caused us to question the American Dream, our dreams and life in general," philosophizes frontman Jon Foreman over the phone while touring the East Coast.

To say that the band’s latest project is the musical translation of Switchfoot’s experiences, thoughts and dreams would be a huge understatement. The band can hardly be defined by a single project. But it can more properly be described as a product of honesty, rocking out and breaking though the musical boundaries to find something meaningful and profound. It’s also a product of some unsound times that the band experienced while attempting to write and produce demos during their last tour.

"This [album], more than ever, shows who we are as a live band," explains Foreman. "It feels like a night of playing rock ’n’ roll instead of a day in the studio."

Nothing is Sound attempts to override the apathetic disconnect created by politicians, corporate kingpins and the disillusioning media to let today’s youth know that there is something bigger than what they are exposed to on a daily basis. It proves that music is truly the best comfort food for the brain. But does it have the power to save us all from the "truth" we’ve been fed?

"I think there’s a ‘first world’ sedative that we’ve been given," says Foreman. "I hope that people will recognize that sedative and become fully awake."

Switchfoot’s lyrics essentially open the door of possibilities as they question the nature of the world around us and the many flawed traits of human beings. The music, though a bit tamer than on the band’s previous release, has somewhat of a sing-along quality that will leave you thinking.

With their newfound studio and touring experience, the boys of Switchfoot (Jon and Tim Foreman, Chad Butler, Jerome Fontamillas and Andrew Shirley) have learned a few new tricks of the trade that have contributed to a more complete and creative listening experience for both its original and newbie fans.

Songs like "Happy is a Yuppie Word," "Lonely Nation" and "Politicians" prove that ’70s idealism hasn’t been lost on the rockers of our generation. Switchfoot has taken the chaos of the world around us and made it into a true symphony of modern humanity by combining Jon’s sweet yet charmingly chiseled vocals; the signature soul-ripping guitar riffs of Jon, Jerome and Andrew; Jerome’s melodic keyboard stylings; Chad’s memorable, hard-hitting back-beats; and the icing on the musical cake – Tim’s heart-thumping, chest-bumping bass.

Among the most memorable songs featured on the album is "The Shadow Proves the Sunshine," a song that hits a personal note for Foreman and the band. It’s a musical-artistic documentation of their inspirational experiences in South Africa earlier this year. Foreman explains the band’s trip to Africa opened its members’ eyes to how much our generation takes for granted. He feels that children from third world countries are getting more out of life because they aren’t as fixated on acquiring the mythical American Dream.

Switchfoot is taking its message of hope beyond the studio and out into the world with the launching of the band’s latest creation, www.lowercasepeople.com. The quarterly online magazine will showcase the music of artists who typically get little exposure, art from up-and-coming artists, various types of literature based on social justice issues and a message board for the artists and their audiences to discuss their work. Its aim is to "serve as both an online home for outsiders and outcasts, and catalyst for change." Foreman lovingly describes the new site as "a chance to practice what we preach."

The Web site – to be launched in the fall – will also sell free-trade items including a recording of a South African children’s choir titled "Kuyasa Kids Live in Kayamandi." The album and T-shirts promoting the Web site are currently available for purchase in the "shopping" section of Switchfoot’s official Web site. Proceeds from the album will go toward a scholarship fund for the children of South Africa.

The band is also planning another tour of the States this fall, which kicks off Oct. 17 in Ventura, so keep an eye out for ticket sales information on Ticketmaster and the band’s Web site.

Nothing is Sound is currently available. Switchfoot’s "Nothing is Sound" tour comes to the Ventura Theatre Oct. 17, L.A.’s Henry Fonda Theater Nov. 11 and San Diego’s House of Blues Nov. 12 and 13. For more information, visit www.switchfoot.com.