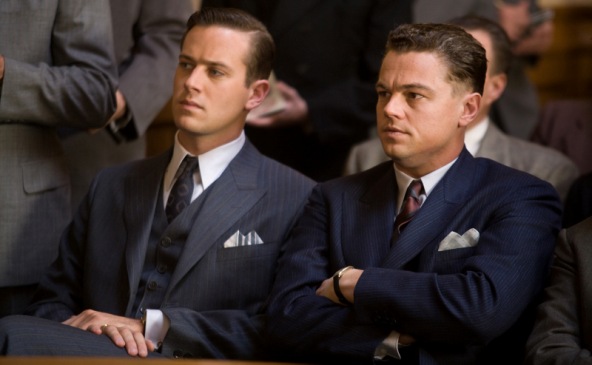 It has been said that people fear most in others that which they are most capable of themselves. Perhaps that’s why J. Edgar Hoover, a man whose life was shrouded in mystery and dogged with the whisper of rumors, spent his life digging up the secrets of others in order to remain in his astutely calculated position of power. Named the first director of the Federal Bureau of Investigation at the tender age of 30, his is a name that hovers in American history with equal measures of disdain and deference.

Perhaps that’s one of the reasons the new biopic about his life is such a tantalizing prospect. Directed by Clint Eastwood and starring Leonardo DiCaprio, in a role many believe could finally secure him Oscar gold, J. Edgar follows Hoover’s rise to power, eludes to both his famously unsubstantiated cross dressing and alleged homosexual relationship with Clyde Tolson (The Social Network star Armie Hammer) and delves into the psyche of a man who revolutionized crime fighting while alienating almost everyone around him.

It was Hoover’s undeniable complexity that drew DiCaprio to the role. The actor credits Academy Award-winning screenwriter Dustin Lance Black (Milk) with cultivating a script that was “a fascinating portrait of this man. You couldn’t write a character like J. Edgar Hoover and have it be believable. He’s a crock-pot of eccentricities. We couldn’t even fit all of his eccentricities into the film.” He describes the movie as being about “characters who devoted their lives to service, to their country. That was their church.” But DiCaprio also admits, “It was a hard concept to wrap my head around at first; to never experience any other love in your life.”

Eastwood, who grew up during Hoover’s four-decade reign over the FBI adds, “I had my own impressions of Hoover as a heroic figure growing up, but this was prior to the Information Age so we didn’t know anything about him except what was occasionally in the papers. It was fun to delve into a character you’ve heard about all your life but never really knew. We’re all just putting our stamp on history, our interpretation of it.”

One of the liberties the film takes is its view on Hoover’s relationship with Tolson, his right-hand man whom he often described as his “alter ego.” The pair was practically inseparable, working closely together during the day, having daily lunches, vacationing together and is now buried a yard apart in the Congressional Cemetery. It has often been speculated the two were lovers, but, without evidence, it was left to the actors’ imaginations to fill in the subtext.

Hammer, who also seems primed for an Oscar nomination in the supporting category, feels that “in order for it to make sense that [Clyde] would stick around, to take that kind of hot and cold abuse [from Hoover], it had to be a love story.”

Because the film moves through Hoover’s life, from his early years as FBI director to his final days leading up to his death in 1972, the actors age 50 years over two hours.

“We sat in the makeup chair for five, six or eight hours sometimes, and had our makeup done,” DiCaprio recalls with a shudder.

“It was an odious process to put on,” Hammer seconds.

“The challenge was not just the prosthetic work,” DiCaprio continues, “but how to move, how to look like you have 50 years in a workplace, how to speak to a young Robert F. Kennedy as this upstart who doesn’t know anything.”

“Who moves better than you, didn’t help,” Hammer finishes with a laugh, adding, “There was a moment on set when I was like, ‘Do not smile!’ Clint decided to show us what he wanted [for a fight scene] with his buddy who’s been with him since ‘Rawhide.’ They basically just had a fight right in front of us. Clint came sauntering up and said, ‘This is a very important scene. Maybe you could try something like this,’ and they’re rolling around on the ground, throwing punches. Then Clint gets up, dusts himself off and says, ‘Yeah, something like that!’”