The Sounds: Branching Out, But Also Tighter Than Ever 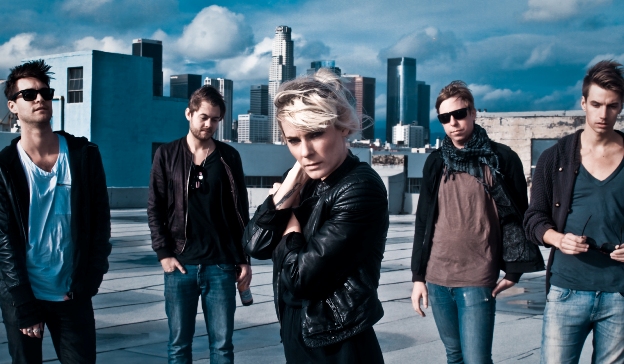 Earlier this year I had the pleasure of speaking with guitarist Félix Rodríguez and keyboardist Jesper Anderberg of The Sounds before their show at the Avalon in Hollywood. I waited for a few minutes under the stage that was already pulsing with energy from the opening DJ.

While The Sounds takes up most of their time, the guys keep busy with side projects as well.

“We have been writing for a few artists; we’ve been producing more, too. We’re into more hip-hop or with rappers. It’s a different genre, but we bring the beat to him and he adds his stuff. It’s fun to get into other music genres,” says Rodríguez. Word of mouth brought more and more artists who wanted to work with them.

Rodríguez continues, “We have a lot of songs that we write for the band and outside the band. The hip-hop artist, he was a DJ in our town that heard that Jesper and I write all this stuff for the band. He heard our beats and wanted to try. It was great fun." Anderberg cuts in, agreeing, “It was a cool experience.”

Listening to the guys talk about the inspiration for their music, it was clear that the fans are a great source of inspiration for, not only their writing, but also their performances. The night before I spoke with the guys, they had spoken to some of their fans.

“I spoke with some die hard fans – the kind you don’t know you really have. I sat down with them, and one of them said something that I always thought was our message as a band. She said, ‘The beauty of your music is that when I listen to it, I think everything is going to be OK. No matter what,’” shares Rodríguez. “I like that motto. Everything is going to be OK. Someday.”

The entire group – which also includes vocalist Maja Ivarsson, bassist Johan Bengtsson and drummer Fredrik Blond – is inspired by “people you meet, the things you go through in your life.” “It’s an interesting thing, because you know when you get inspired, but you don’t always know what triggered it. It can be something that you experienced six months before.”

Previous records were produced by someone from outside the band, but the band’s latest, Something to Die For, took a turn in a different direction. They decided to self-produce and are happy with the result.

“After every album, we always ask, ‘Why did we have a producer?’ This time we had that discussion before we actually started recording.”

With the work done, and the album out they seem relieved.

Of course like most artists, they are their own worst critics.

“You know, every recording process [you] have a momentary freak out. Everything makes you want to start over. But on this album, I think we had only one of those moments.”

“You have to go through it so you can come out on the other side with the good feeling. It can all change in a moment.”

Like their fan said the night before, “Everything will be OK.” The day that I sat down with them was at the birth, if you will, of their new album, and they were happy with the response it had gotten so far.

“The album is out. It’s like releasing your baby, it’s weird. Everyone will have an opinion on how your baby looks.”

For now, the band is back on tour in support of Something to Die For and is visiting Los Angeles again. With the energy and level of performance that I saw at their last L.A. show, I can assure you, it will be one not to be missed.

The Sounds perform Nov. 15 at the Glass House and Nov. 16 at the Wiltern. For more information, visit the-sounds.com.