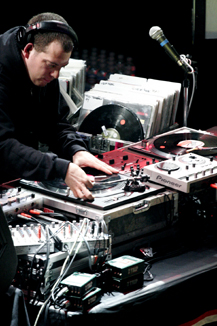 Untitled Document Hip hop or mash-ups? A sold-out crowd of devoted Z-Trip (Z) fans packed the Sunset Strip House of Blues, curious as to what the night would entail. Z-Trip was set to headline his first Los Angeles show since the April 19 release of his eagerly anticipated album Shifting Gears – L.A being only the second stop on the long tour schedule.

DJ Goldenchyld got everyone’s blood flowing when he opened the night with some kickin’ beats. Old-school hip-hop favorites Black Sheep immediately followed Goldenchyld, and Andre Titus (Dres) and William McLean (Mista Lawnge) threw down the classics along with some joints off their upcoming album. They closed the set with "The Choice is Yours," leaving the spectators amped for the man of the evening.

Before Z kicked off his set, large screens displayed scrolling text in Star Wars fashion (seemingly the theme music of the night), describing the events Z encountered while producing Shifting Gears. At the height of anticipation, Z strutted onto the stage showering heads with copies of his new 12-inch single.

Z started his set with a few of his renowned mash-ups featuring old-school hits like Queen’s "Bohemian Rhapsody" and Jackson 5’s "ABC." Playing to the crowd, Z killed the music, shouting out, "It’s just gonna keep getting better and better!" It did. He cranked out funkdafied variations of Radiohead, Tone Loc’s "Wild Thing" and multiple AC/DC tunes, showing first-timers exactly why he is where he is now.

Busdriver, speed-rhymer extraordinaire, was the first of many special guests brought out by Z. Fans of Busdriver rejoiced as he performed "Take Two Copies," spitting out the lyrics faster than the speed of sound.

Next up was the U.K.’s own Killa Kela, who grabbed the spotlight as Z took a short break. Kela, beat-box master, wowed the entire venue, mouthing an impeccable rendition of Kelis’ "Milkshake" without using any instruments.

Z then proceeded on with his blend of mash-up goodness. De La Soul, Chic, Devo and Kriss Kross kept the heads bobbing and the hands in the air.

The night concluded with Z and Murs (dressed in pajamas) busting out "Breakfast Club" followed by the Z-Trip mix of DJ Shadow’s "Monday." After all was said and done, Z thanked the audience once again and asked fans to "chill" with him at the merch booth after the show, showing his devotion to both current and long-time fans.