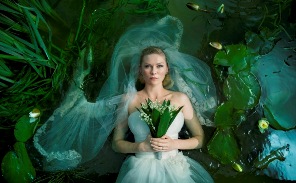 He may not have the best judgment in the spontaneous humor department (Nazi jokes are rarely audience pleasers, guys. Do not do it.), but Danish director Lars von Trier is more than capable of making an utterly beautiful film, as he proves in Melancholia, a movie that will have you leaving the theater in awe and inexplicably feeling elated for having just watched a mysterious planet plow into Earth.

Calm down, that’s not a spoiler. Unlike the typical Armageddon-type apocalyptic movie, Melancholia takes out the “thrill” of anticipating the non-end of the world. In fact, the film reveals in the very beginning that the Earth will cease to exist, through a stunning opening sequence harmonized with Wagner’s prelude to “Tristan and Isolde,” an exquisite intro that will captivate more than the top-hat-and-monocle-wearing kind who gets teary-eyed during classical music performances.

It may feel like it’s verging on overindulgence on the director’s part after a good few minutes, but it nonetheless hypnotizes the audience, albeit slowly, into the narrative and makes sure that they stay there, engrossed, for all two hours and 10 minutes of it.

We then see a pair of newlyweds running late to the reception of their wedding in perhaps the most lighthearted part of the movie. The beautiful and bubbly Kirsten Dunst whom we all know and love graces the screen as Justine, engaged in a jovial dance with her new husband Michael (Alexander Skarsgård), and then disappears for the remainder of the story replaced by an unkempt depressive.

The movie is, after all, titled Melancholia, a name that pertains not only to the planet threatening the Earth (which coincidentally makes its first appearance on the night of the wedding) but also to the chronic depression that Justine struggles with.

With the insight that depressives stay calm in stressful circumstances, von Trier created a character that basks in the impending nothingness and surrounded her with human beings who shrivel in defeat at the idea of it. “It’s nice to be me sometimes,” Justine says to her anxiety-ridden sister, played by a dispirited Charlotte Gainsbourg.

Melancholia is propelled by the raw beauty of nature, a striking contrast from the usual CGI-cored apocalyptic movie. This can be seen in the isolated Swedish castle and the landscape that surrounds it, and the stripped emotional reality portrayed phenomenally by the cast (This could very well be Dunst’s best performance yet.).

The breathtaking closing scene in itself is already worth a fancy theater ticket price. And even though you’re not the sophisticated, edging on pretentious, film-going kind, it will compel you in an unexpected way and may even wet your non-monocled eye just a little bit.