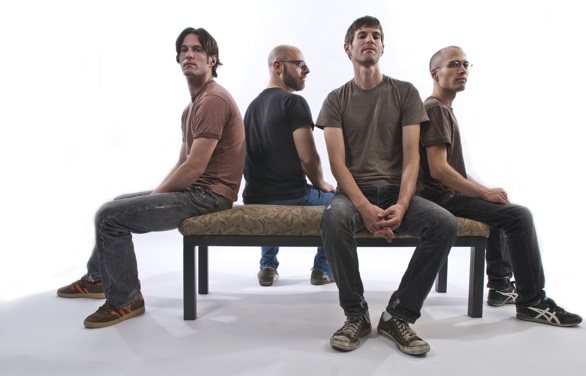 (Credit: Tobin Voggesser)
It’s not too often you see a band wait until its fourth full-length album to stamp only its name on the cover.

For Lotus, though, doing so signified more than just an easy way out of labeling its finished product something else.

“It just felt like a culmination of a lot of work,” bassist Jesse Miller says about the quartet’s decision to self-title the 11-track LP that came out in September.

After all, Lotus always seems to have a new project on its hands. The livetronica veterans, who started playing together more than a decade ago at Goshen College in Indiana, are regarded as some of the hardest working musicians in the business today.

That’s because they’re constantly touring, hitting big and small markets all over the country as well as the summer festival circuit year after year. And when they happen to not be on the road, they’re in the studio composing new material.

Yet what brought Miller, his twin brother Luke (guitar, keyboards), Mike Greenfield (drums) and Mike Rempel (guitar) together initially was their love for jam rock.

Whether it was the Grateful Dead, the Allman Brothers or Phish, Lotus began expanding upon that shared interest by combining sounds of jazz, rock and funk with elements of dance music from their days of listening to Talking Heads, the Orb and Aphex Twin.

“Luke and I are always trying to push ourselves compositionally, so that always means expanding our sounds in different directions,” Jesse explains.

But back in the late ’90s, Lotus was still rooted heavily in jam rock, habitually extending songs into the 20- and 30-minute range during shows.

“We were kind of going for this idea of ‘Let’s take these grooves and figure out how we can stretch them out,’” Jesse recalls.

On the band’s latest work, that strategy is nowhere to be found. While Lotus’ sound still spans across multiple genres, it has turned more of its focus toward its electronic influences.

The first two cuts off Lotus, in fact, are strong examples of that. “Golden Ghost,” which Jesse proudly states as his favorite song on the album, hooks you almost immediately with a groovy bassline that’s followed by a funky guitar riff and a glitch hop sample that mesh together quite well.

Synthesizers make their way to the forefront on the following track, “Blacklight Sunflare,” while guitars also take a backseat to Greenfield’s dynamic rhythms on both acoustic and electronic drums.

“I think we were feeling the move to try to compositionally trim out all the fat and really get down to the core of the compositions,” notes Jesse, who also handles the band’s sampling duties. “There’s a sonic thread through all of these ideas.”

Still, each song on the album features its own twist.

Lotus takes a trip down to the bayou on “Bush Pilot” as horns carry a New Orleans funk tune that’s later accentuated by a charming, yet distant flute melody. “The Surf,” meanwhile, maintains a summery feel that carries into the ensuing song, “In an Outline.”

The rest of the album fails to disappoint too, as songs such as “Harps” and “Lou Carcohl” groove well enough to bring a house party to life in a matter of seconds.

It’s a piece of work that Lotus should be proud of, particularly for a band that’s made its name on high-energy live performances and awe-inspiring light shows amid the jam band scene.

“We don’t like to repeat ourselves,” Jesse admits. “Once we feel like we’ve followed one idea, we really want to change it up the next time around.”

Los Angelenos will have the chance to see for themselves just how much things have changed for Lotus when it takes the stage at the historic El Rey Theatre on Nov. 17 for the first time.

And after playing venues like the Roxy and House of Blues Sunset Strip during previous trips to Los Angeles, it’s a step up for a band with a core fan base that primarily resides on the East Coast.

“I think our fans are always excited to see us because it’s hard for us to make it out there more than once a year,” Jesse says.

With the way Lotus has changed course of late, they certainly should be.