Showing Some Skin: Brutal Language from My Ruin 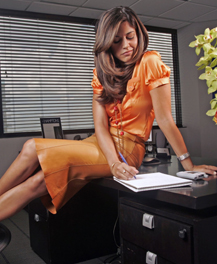 Untitled Document You know how to play it safe at work. No one has ever been shown the door for wearing a demure suit and silk scarf.

But how much sartorial sex you can get away with at the office.

Companies with anything remotely resembling a dress code seem to agree that the most egregious transgression deals with certain cleavage, namely, those of the breast and the butt.

Yet there is an altogether different type of cleavage that some believe has no business exposing itself in the workplace. We’re talking toe cleavage.

Hidden toes are something some human resources departments still demand. Johnson & Wales University, in North Miami, for one.

There are other subtle issues of exposure to navigate. In the 1980s, female executives wore shoulder pads to rival linebackers and blouses buttoned up to their necks, often with a flouncy bow at the top. That has morphed into jackets with softer lines, and a camisole or lingerie-like under-thing beneath. But is that much femininity in the office taking the trend too far?

Not if you judge by the racks at major department stores. Nordstrom in Coral Gables, Fla., just received a large shipment of fitted, Spandex tops for professional wear.

At the Miami City Club, a place so formal that servers wear long-sleeve uniforms, hose and closed toe shoes, general manager Wendy Kallergis said she sometimes pairs a suit with a lacy top beneath – "as long as it’s not too low."

And if she’s feeling warm enough to remove her jacket during the day? Too bad.

"I don’t take it off," Kallergis said.

At offices where employees are expected to be fashionable, if not trendy, there are fewer worries about toe exposure, and more attention given to whether people are simply too casual. Looking hip doesn’t mean that no sartorial standards apply.

For women considering the merits of the mini-skirt, a la Ally McBeal in the hit 1990s TV series, Kathy Mayers, director of the Fifth Avenue Club at Saks in Bal Harbour, Fla., has a newsflash: Don’t.

This fall, Mayers is seeing a lot of fitted jackets in Saks. And judging from the racks of other department stores, as well, where many professionals buy their wardrobes, there’s nothing wrong with a pencil skirt and blouse that are tapered enough to prove you’re female.

But having coworkers notice you have a great figure is one thing. Wearing something that leads a colleague to ponder what’s under your garments is another. The former suggests you’re attractive. The latter, sexy.

And anything with the word S-E-X has no place in an office setting, executives say.

"If that’s the way you’re thought of now, you’ll still be thought of that way in 20 years, only there’ll be someone sexier," said Adrienne Arsht, chairman of TotalBank.

"You’ll still have something to sell 20 years from now if you get hired for your brains."