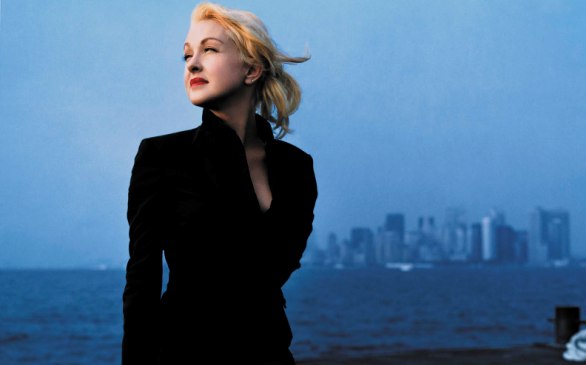 Cyndi Lauper sings the blues. And anyone having a hard time taking the blues seriously from the mouth of this notoriously quirky ‘80s diva is in for an awakening. Her recent release wasn’t nominated for a Grammy in the Blues category for nothing, after all. Backed by several blues legends and long time collaborators, Lauper bounds onto the stage to a standing ovation from her adoring audience before she even so much as opens her mouth. She is all youthful exuberance at 58, dancing like a punk in her black leather to a wailing harmonica.

Lauper has dabbled in all kinds of genres, but it’s clear that she’s dedicated to the blues and on this tour in support of her Memphis Blues album, she’s taken along some of the best musicians in the business on the ride. “It’s the basis of everything we listen to today and everything I ever sang,” she explains to the audience. Sprinkled throughout her repertoire of the obligatory Etta James, Robert Johnson and Tracy Nelson, she brings out her own classics, and with the exception of a somewhat clunky blues re-working of “She-Bop” the melange works remarkably well. It just so happens that “Change of Heart” lends itself remarkably well to a harmonica blues solo.

Live, Lauper is dynamic. She loves her audience. Even when she gives them sass, she finds herself apologizing and doling out hugs, and they love her with equal fervor. Her voice has only improved over the years, the bombastic powerhouse wail has now matured into a stunning force to be reckoned with. Her show is one huge party, and within a very short period of time the entire house is dancing and singing along. If you came to a Cyndi Lauper concert and didn’t just wanna have fun, you likely went to the wrong show.

She rounds out the night with her hits, launching into “Girls Just Wanna Have Fun” from a gospel keyboard solo, leads the crowd singing “Time After Time” as she strums her Appalachian dulcimer, then pauses to plead the case of homeless gay teens and urge parents of LGBT kids not to throw their kids out onto the streets before conquering technical difficulties (out of tune dulcimer) to deliver a sparse but powerful performance of “True Colors.” Lauper is a national treasure, and her diverse talent is as huge as her character.