“Radiance: The Passion of Marie Curie”: Use code ALDACC for discounted tickets. 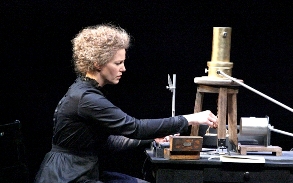 Even the tiniest speck of radium will glow in the dark, miniscule but radiant. It’s an element that shares the rare luminosity of Anna Gunn, John de Lancie and Dan Donohue, who currently star in the Geffen Playhouse’s new production, “Radiance: The Passion of Marie Curie.”

The play is based on the life of Marie Curie (Gunn, perhaps best known for her role on “Breaking Bad”), who – in case you missed the recent Google homepage in her honor – discovered Radium, was the first woman to win a Nobel Prize (for physics in 1903) and, after being awarded the prize for chemistry in 1911, became the first person to win in two disciplines. It’s a heady subject made relatable and heart wrenching as it exposes Curie’s personal struggles to gain recognition, cope with the unbearable loss of her husband (de Lancie) and fight a growing connection with a fellow great mind, Paul Langevin (Donohue).

What may surprise people is this historical jaunt was written by Alan Alda of “M*A*S*H*” fame. An accomplished author, screenwriter and life-long science enthusiast, Alda previously traveled the world for over a decade interviewing scientists for the PBS series, “Scientific American Frontiers,” and works with Stony Brook University’s Center for Communicating Science, where he helps develop programs that enable scientists to communicate their complex visions to a layman audience.

Such is the task Alda has saddled himself with in creating a theatrical experience out of the life of a woman who pioneered research on radioactivity and changed the landscape for female scientists. Undeniably, at times, the subject matter can go over the audience’s head or grow a bit tiresome, but thanks to Gunn’s incandescence and vulnerable potency, the show surges forward. Donohue is another stand out as Curie’s tormented admirer, while de Lancie charms and delights as husband Pierre Curie.