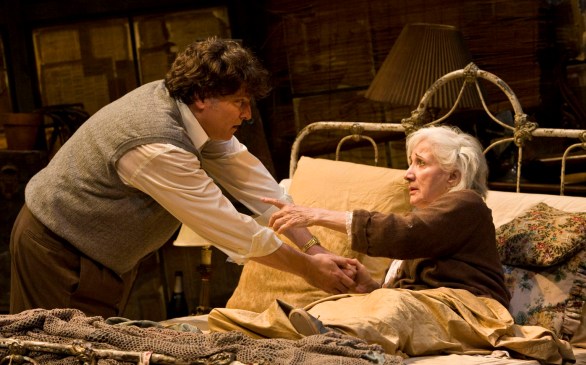 “Vigil” starts off incredibly depressing, but don’t let the daunting start fool you. Written and directed by Morris Panych, “Vigil” is a grossly disturbing yet outrageously funny play.

Kemp (played by Marco Barricelli) receives a random letter from his aunt Grace (played by Academy Award winner Olympia Dukakis), who is on her deathbed. They haven’t seen each other in over 30 years, and he is the only close relative she has alive. We don’t know exactly what that letter says, Kemp himself admits to having read it quickly and not carefully. However, he resentfully proceeds to pack his bag, leave his life and go to be at his aunt’s side.

One day passes, then another, a whole year and the woman stays alive and doesn’t seem any closer to death. Kemp becomes impatient and tries figuring out a way to accelerate her demise but has no luck and becomes increasingly frustrated by her and the entire situation.

Then the play cuts to intermission, but the second half has a twist so subtly delivered that when you make sense of what you just heard, it will utterly have you gasping for breath! I don’t think anyone in the audience saw it coming. I was shocked.

Although the subject matter is quite heavy and difficult to swallow, the sincerity with which the characters expressed their human vulnerabilities was palpable. Loneliness is a bitch. Dukakis’ character is a lonely old lady who doesn’t have much dialogue but is a brilliant presence throughout. Barricelli’s character won’t stop talking, but you don’t want him to because every line out of his mouth gets cruder and more sarcastic. At one point Dukakis takes out her compact to apply lipstick and make-up, and Kemp tells her not to trouble herself because the morgue will take care of that. They make the subject of death as humorous and quirky as humanly possible.