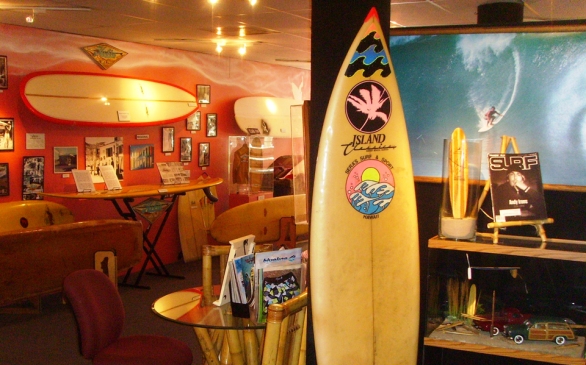 “We’re goin’ to Surf City gonna have some fun…” The line comes from the 1963 hit song “Surf City” by Jan & Dean, and back then, the young men were singing about catching waves and meeting girls. Some things never change, and surfing and mingling with members of the opposite sex are of course still popular activities in Surf City. But just where is this Surf City? According to Jan & Dean’s Dean Torrence, Surf City is and always has been Huntington Beach. And that means that a trip to Surf City is just an easy drive down the Pacific Coast Highway.

Huntington Beach has more than eight miles of sand to play on so you won’t ever have a problem finding a place to sunbathe or get in the water. Waves are consistent, and there are no rocks or hazards to worry about so you’ll find surfers flocking here year round.

When you’re not busy in the water, a good way to explore the area is by bicycle, and you can rent one (or a four-person pedi-cab called a surrey) by the hour at Waterfront Adventures (21100 Pacific Coast Highway; wheelfunrentals.com). A nice walkway runs the entire length of the beach so you can pedal ’till you’re content.

The main shopping and eating area along the beach is located at Main Street and PCH, and here’s where you’ll find a bronze statue honoring surfing pioneer Duke Kahanamoku. The sidewalk adjacent to the statue is home to the Surfing Walk of Fame where you’ll find tiles honoring the likes of Andy Irons, Buzzy Trent, Wayne Lynch and local hero Rich Chew. Some of the honorees have left their handprints or a message in their patch of concrete. This area though is just a warm up for surfing fans; the big shrine to the sport, the International Surfing Museum, is just a short walk away.

The International Surfing Museum (411 Olive Ave.; surfingmuseum.org) is housed in a relatively small building, but it is packed full of surfing memorabilia. One section of the museum has Duke-related items including a bronze bust that used to stand near the old Huntington Beach pier. There’s a quirky hood ornament too that portrays the Duke surfing “goofy foot.” Other sections of the museum house various significant surfboards, and there’s also a scale model display showing how boards have evolved from the hardwood boards used by Hawaiians centuries ago to the balsa and foam models of today. Along the museum’s back wall is a display of guitars used by famous players like Dick Dale and members of the Surfaris and other legendary surf acts.

The back of the museum also houses a mini theater where you can sit and watch the first Endless Summer movie in its entirety; the 1966 film is a classic documentary that follows Mike Hynson and Robert August around the world as they search for the perfect wave. The museum even has jars of sand collected from far-flung beaches favored by surfers. If you’re in need of a souvenir T-shirt, a new Hawaiian shirt or some surf music then don’t leave before you’ve checked out the gift shop.

Another fun place to visit in Huntington Beach is the legendary tiki bar and restaurant Don the Beachcomber (16278 Pacific Coast Highway; donthebeachcomber.com). Here they carry on in the spirit of the late Donn Beach, the original Don the Beachcomber, the man who invented the tiki bar and lots of the drinks served in them. If you’ve ever enjoyed a Zombie, Tahitian Rum Punch or Navy Grog you can thank Beach and what he started way bay in 1934. Ask to hear the full story over a Mai-Tai in the restaurant’s Longboard Bar. Don the Beachcomber also has live entertainment and there is usually a reggae show going on Sunday afternoon.

Huntington Beach, both the beach and the city, are easy to explore; you don’t need to worry about maps or getting turned around. But if you have a question or need to be pointed in the right direction, just look for the information booth on the beach side of the street at Main and PCH.