Barlo and The Del Monte Speakeasy 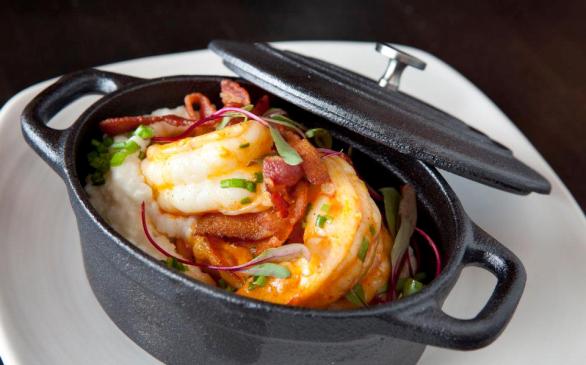 Two spots are up and running in Venice within walking distance from each other, and both celebrating the eclectic, burgeoning scene that most of us have come to love about the beach community. Barlo Kitchen & Cocktails, a new eatery occupying the space left by Hash in Hotel Erwin, is so far living up to its “barn to belly” reputation. Most of the ingredients are locally sourced, sustainable and minimally processed to produce simple, hearty creations.

The young executive chef, Jason Wiggin, began his career at the age of 15 as a line cook before enrolling in French culinary school. From there, he trained with Chef Hammer, known for the delicious spread at Viceroy Santa Monica and Westside Tavern. Chef Wiggin’s addition to the Hotel Erwin team started as the breakfast spot Hash, but with the high prices and non-competitive menu (Benice and Danny’s within walking distance), a reworking was in order.

Now the well-rounded Barlo is ahead of the game offering bar snacks, little plates, charcuterie and dinner entrees. I had the chance to experience Barlo for an early dinner, as they are still in the opening stages. I ordered the Chicken Burger with a spiked mint chimichurri, feta and arugula – mmm, that alone could get me out of the house in the rain. Then I had the Barlo Burger with caramel bacon and herbed Chevre cheese, and that’s pretty much all she wrote. This is the definition of what “I just want a good burger” means.

I am not one for grits, their texture is just not appealing to me, but once again I ate my words when I tried the Shrimp and Grits. First, the presentation alone was great, coming in a mini stockpot, complete with lid. Large pieces of bacon accompany the dish, and the brown butter atop the jumbo shrimp really spiced up the mild flavor of the shellfish. This is a good one to share with friends.

After my meal at Barlo, I walked less than 100 steps over to the Townhouse – well, underneath the Townhouse actually – to find a spot that pretty much transported me out of Venice. A real life Prohibition-era establishment has re-opened its doors, and this time the alcohol is flowing legally and freely. The Del Monte Speakeasy has been in existence since the early ’20s, hidden under the weekend warrior bar Townhouse, built in 1950.

Today, the Del Monte Speakeasy embodies the old era with murals of the beautiful canals and the Grand Prix races that along the streets there. The Del Monte Speakeasy is literally a boardwalk empire, with live music, burlesque shows and strong cocktails featuring spirits that were heavily consumed during Prohibition. Add to this an eclectic menu with ingredients from the local Santa Monica, Culver City and Venice Farmer’s Markets and you’ve got a mainstay in the Venice community.

The Pre-Prohibition Classic menu offers a punch, especially with the London Dry Gin laced French 75 and Negroni. The Negroni is definitely for the serious spirit connoisseur, packed with Campari, sweet vermouth and a fresh twist of orange.

General Manager and Beverage Director Brandon Ristaino (Bigfoot Lodge West, Thirsty Crow) brought his wild imagination to life at this establishment. The “Bourbon Baron” as coined by foodies with his impressive menu from his prior spots is focused on bringing patrons from the old to the new, changing the menu four times a year. The Boardwalk Broad is filled with his signature bourbon, kiwi, lemon and home-brewed chamomile tea syrup is finished off with a bit of egg white and shaken to a nice frothy beverage. The egg white might sound off putting, but try it; you won’t even notice it.

And there you have it, two new spots for you to whet your palate and appetite that are not only delicious, but budget friendly!