We Are Lions: Hotter Than Your First Kiss 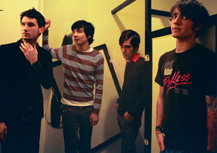 We Are Lions. It calls to mind a certain image, doesn’t it? It oozes masculinity, demands attention, grabs you by the balls. It’s gutsy, chock full of testosterone, a manly man moniker. It’s Brad Pitt in a skirt.

Atom Whitman, Matt Matawaran, Reza Rasoli and Matt Quarnstrom (alias ‘Q’) formed We Are Lions sometime around 2001, but they got their official name upon watching the 2004 "epic" (to use the term loosely) film Troy.

Frontman Whitman, digging into a slice of pizza before their show at the Key Club, explains the name’s background: Achilles (Mr. Pitt, clad in a rather adorable skirt and sandals) says it in an inspirational speech to his army before they storm Troy’s beaches. "Brad Pitt is the only important thing for us," he says of the name’s origin, without a hint of shame. "[We’re] huge Brad Pitt fans."

The pop-rock quartet – rounded out by Matawaran on guitar and keyboard, Rasoli on bass and Q on drums – just released their debut record, Eight Arms Made This, on the new indie upstart At One Records. Yet the band has already performed on a number of solid bills, including a headlining show with a quaint little band by the name of Audioslave.

"Our embarrassing claim to fame is that Audioslave opened for us, their first live show ever at the Roxy. It was supposed to be our show … and like, the day before we got a call from them," Whitman says plainly, not fazed by their accomplished openers.

Not to be categorized musically with the alternative cock-rock of Audioslave, We Are Lions see themselves as something different. They cite classic influences such as U2 and the Smiths, but current favorites include French Kicks and Brand New. Their own sound is such a unique auditory amalgam, in fact, that it’s actually easier for them to explain what they aren’t.

"Not quite emo, not quite post-punk, not synth-pop," Whitman muses, trying to find the words for their brand of rock, before he and Rasoli come to an agreement that they’re a mixture of "rock, pop and soul."

Volcanic? Perhaps. But that doesn’t mean their hot sound is a hit with everyone.

Of being an up-and-coming band in the City of Angels, Whitman sighs, "L.A.’s tough because everybody’s too cool for school … If [a band] isn’t like, from New York, or whatever the hottest thing is right now, then they just scoff at it."

"We’ve found that every time we leave Los Angeles and go to smaller areas, the response is so much better because kids are so much more into accepting new music."

Nevertheless, too-cool L.A. has managed to throw We Are Lions a bone or two. Local fans recently showed their appreciation by voting them the winner of the Ernie Ball Battle of the Bands, giving them a side-stage slot at the legendary Warped Tour’s stop in Pomona. A few fans in particular have even reached out personally to show their gratitude.

Whitman recalls, smiling: "I got a message from a kid, an e-mail, telling us that he put on one of our songs on his first date that he went on and got his first kiss. … He was like, ‘You guys don’t understand, that song is seriously something I will remember forever.’"

"The kid was like, so nervous while he was even typing it!" he enthuses. "The soundtrack to a first kiss – that’s kind of unbelievable."

And with the way things are going, We Are Lions are set to be the soundtrack to a whole lot more.

Eight Arms Made This is currently available. We Are Lions are playing Club Moscow at Boardner’s in Hollywood Sept. 19. For more information, visit www.youarealion.com.