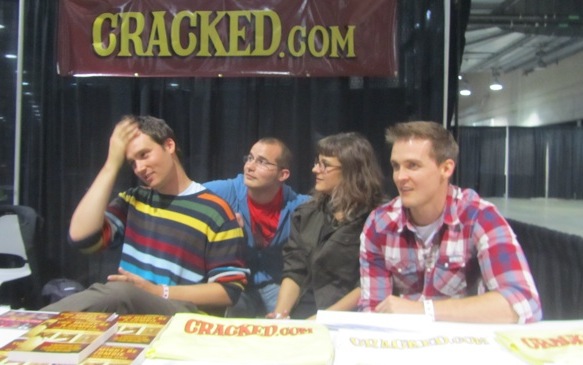 The cast of "After Hours"

The first weekend of November brought Comikaze to the Los Angeles Convention Center. Upon entering the convention it was apparent that this one was a little different. It was smaller, less sensational, a little more real. Honestly, it reminded me of how the early conventions must have been with not a whole lot of big studio participation and a few seemingly random booths; yes, there was a booth doing real tattoos (It was all sterile and very legit, but still.).

Despite the low profile nature of the whole affair it was refreshing in the sense that it wasn’t overwhelming, and there were plenty of celebrities around, with “Star Trek” being well represented and the likes of Elvira and Stan Lee on hand signing autographs.

I was lucky enough to get to sit down with a couple of people from one of my favorite Web sites, Cracked.com. (Wow, OK, a little side note: I just went to the site to fact check something and totally spent 20 minutes there, so go there, but beware, you will be inundated with awesome.) Anyway, I got the chance to speak with Jack O’Brien (Editor-in-Chief) and Dan O’Brien (Senior Writer, no relation to Jack) about the site and the scene.

Jack bears a resemblance to Tony Robbins (who just happened to be hosting a seminar a few floors above the convention – coincidence?). This was the first convention that gave him a chance to meet the fans, and he was pleasantly surprised at the diversity. He spoke with fans ranging from a 45-year-old French architect and 12-year-old boy, both of whom gave glowing appreciation for the site.

Cracked.com began with Jack in 2006 and was then revamped to its current incarnation in 2008. Starting as a spin-off of Cracked magazine, it has grown more popular than the magazine and now includes several original shows, a book and about a million lists. I love the lists; they aren’t your typical Top 10 lists with boring entries and little explanation. Nope, they’re more like little essays with topics like “The 4 Most Spectacular Mental Breakdowns in Sports History” or “5 Insane Ways Fear of Masturbation Shaped the Modern World.” Yeah! Right?!? Believe it or not, these are legitimate, fact-checked entries written in a way that is both informative and really entertaining.

Dan was also very impressed by the fans’ reception and felt that they were some of the funniest people he had met. Dan not only writes for the site, he is featured in the shows “Agents of Cracked” and my personal favorite, “After Hours.” “After Hours” is basically four of the writers (Dan, Soren Bowie, Katie Willert and Michael Swaim) sitting down and discussing important topics, such as “Why Star Wars is Secretly Terrifying for Women?” and “Which Ninja Turtle Are You? Life’s Most Important Question.”

With it being scripted (usually by one of the four), each show really gets a chance to take the questions in some really funny and often thought-provoking directions. For instance, in one recent show it was brought up that zombies may be how liberals see conservatives and vampires are how conservatives view liberals. Sometimes it does get a little deep, but it’s all very funny and witty.

Each person brings very different views to the topics although what you see isn’t exactly how they are in real life. Swaim is far more intelligent than he plays in the show (which isn’t hard to believe or achieve), and Willert is really very sweet, which doesn’t necessarily come across in the show. I was actually kind of taken aback when I saw her laughing in the audience at one of the panels the cast participated in. Despite the embellishments on each persons character, they all do contribute to the show much like they do on the show. It’s all very entertaining and being that I’m out of space here I suggest you to Cracked.com and see what your life’s been missing.