Vanaprasta: Takes Over the Satellite 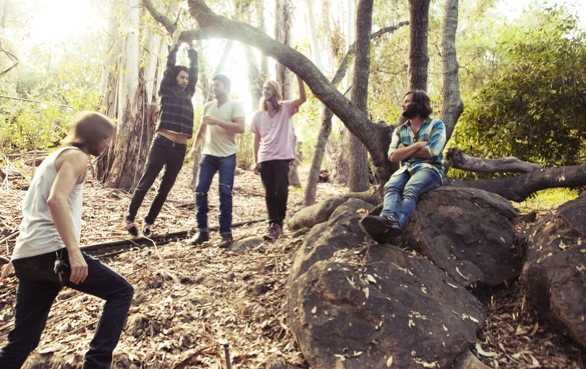 My introduction to Vanaprasta was a couple months ago at a show in Silver Lake at the Thirsty Crow. When I mentioned that show to Cameron Dmytryk and Steven Wilkin of Vanaprasta, they said that it was a very different set than what we can expect at their Satellite residency this month.

Truth be told, they were right. The set on Nov. 7 at the Satellite was an extreme concert, complete with each band member getting his moment to shine.

Since I first saw them, Vanaprasta has been going nonstop. “We’ve been really busy lately since we just released the record on Nov. 1st. To celebrate the album, 98.7 invited us to play the Penthouse. They gave us the evening to celebrate. We did a kind of stripped-down version.”

When asked about the beginning of the band, Wilkin tells a story of happy accidents that led to where they are today. “Cameron came with us and jammed for a bit, and immediately I knew I wanted him to be in the band. Colin [Desha] and I worked together at a restaurant in Beverly Hills, and mutual friends encouraged us to play. Then Cameron brought in Ben Smiley on drums. It was very serendipitous, and I think the universe was bringing everything together at that time.”

They seemed thrilled with escalating success, and the future seems bright.

“There are definitely some serendipitous things that have happened with the band that have lead us to believe that this is what we are supposed to be doing,” he adds.

For those of you that have not yet gotten to listen to the band’s album Healthy Geometry, I encourage it. For everyone hoping for more, there are songs in the works.

“We have about three or four songs that we have lined up for a follow-up record for next year,” Wilkin says.

Dmytryk chimes in, “When we were in San Fran. someone told me that your first album is everything you’ve ever created. Even if it’s not all on the record, it’s just everything – your influences and your chemistry as a band coming together. Your second album is everything you wrote after that in 16 months. It’s scary, definitely, you now ’cause we put a lot of time into this record, and we really won’t have that much time for the next one.”

Their music is spreading around the world, and they are amazed at the reactions. Wilkin shares a message they received earlier in the day.

“We just got a message from someone in Denmark. He said that our record was a masterpiece, and I feel pretty humbled. People really attach to the message that we’re sharing. There is a really emotive feeling in the music we create and we did that kind of unknowingly. It covers a lot of growing up, going from that young 20-year-old to moving into the more heavy issues about relationships and dealing with that. Learning how to better yourself.”

For the band, the writing process is a collaboration.

“Cameron wrote a song for the album called ‘Healthy Geometry’ which I think really expresses the feel of us. Every song is different. Someone will bring something in, and it will grow from there. We don’t keep it like one person writes a song. The songs for us, just happen really. It’s a pretty democratic process. We never tell one person in the band that their idea isn’t valid. It seems to work for us. We need every member of the band to make Vanaprasta happen, and without that link, it doesn't happen."

Vanaprasta performs Nov. 21 and Nov. 28 at the Satellite. For more information, visit vanaprasta.com.